Mayhem on the A1! 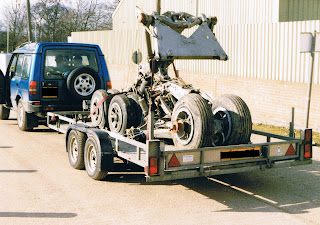 Many spare parts are needed in order to keep such a complex machine in working order so an offer of spare undercarriage assemblies was not refused.

The day started off with a stop off for breakfast at a McDonalds on the motorway, one of the team suggested that the scrambled egg looked more like the new insulation in his loft at home - we knew somehow it was going to be an interesting day!

After many hours of motoring including seeing a sign indicating directions to a 'Secret Nuclear Bunker' (Kelvedon Hatch) We all had a good laugh and uttered "How can it be secret then??" "Don't tell the Russians!"

We arrived at Hanningfield Metals, Essex and a Victor main undercarriage and nose undercarriage assemblies were then loaded onto my car trailer and the assembled mass resembled some sort of crazy buggy from 'Mad Max'!   "This is going to raise some interest on the motorway" I thought and I wasn't wrong.

After 'mountaineering' around the vast piles of interesting crumpled aircraft in the yard like a bunch of kids in a toy shop we set off for home.

Driving down the sliproad onto the motorway I suddenly got the feeling the car in the inside lane was hanging back and giving us a once over. It was then I realised it was a Police patrol vehicle. "Nobody look" I said. "There's a Police car and he's given us the eye!"  At that point everyone (except me) turned and gawped at the Police Officers in the car alongside. With a return look that I can only descibe as 'maniacs' the Police sped off!

Some time later driving up the A1 near to RAF Wittering I again noticed a white car level alongside my window. "Nobody look", I said yet again, thinking the worst...   One of the guys then recongnised the driver of the white car who was waving like crazy at us. "Its Captain Flack!" said Andy King. It was Mike Lousada aka Captain Flack to one and all that know him and he just happened to be driving up the A1 that particular day.   He then pulled in front of us indicating us to stop and so we pulled into the first turning. Unfortunately he mis-judged the stopping distance of our Mad Max creation and stopped suddenly. We had to take 'evasive action' and swung around him in order not to take his now open car door off or at worst knock him down!

"I just KNEW it had to be you with that lot on the trailer, it couldn't possibly be anybody else!!" He said, obviously pleased to see us all. Shakily and still in mild shock for not killing him I uttered something along the lines of "What a coincidence it was to be on the A1 at the same time etc".....

This particular day is firmly etched in the folklore of XL231 and is often mentioned, usually over a beer or several.....
﻿
Posted by Missppitstop at 21:23