The Warranty expired upon delivery!

I first became acquainted with XL231 'Lusty Lindy' on the 25th November 1993, when she was delivered to Elvington by air by Sqn Ldr Steve Jenkins and crew. It wasn't the first time that I had seen her, that was on the 24th October at RAF Marham when my father (Gerry) and I went to view them with a view to purchasing one. As we drove in through the gate my dad said "What's that aeroplane?" meaning the Victor gate guardian XH673.I responded with "Its a Victor!". The response then was; "Wow,We're having one!!" So, he didn't take much convincing after that! We were allowed to look in several potential aircraft which wasn't great as the canopy covers were on and it was very dark inside. The Senior Engineering Officer, Sqn Ldr Sargeant (Who I thought had an odd name for an officer) was extremely helpful and suggested certain aircraft were a better bet than others for reliability. In the end however it was suggested that we tender for any airframe and someone, no doubt in M.O.D decided which one it was going to be. 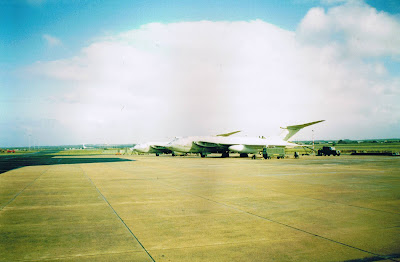 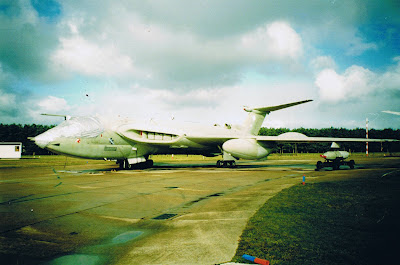 Viewing Day: 'Lucky Lou' XM717. Now on display as a nose section in the RAF Museum 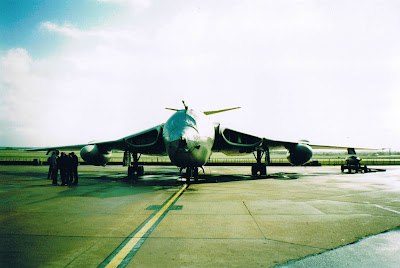 The last time I had seen a Victor perform in anger was on Friday the 13th August 1993 when a Victor K2 from Marham had overflown the Yorkshire Air Museum to celebrate the first roll-out of HP Halifax 'Friday the 13th'. Unfortunately I never found out which aircraft it was. It left an impression on me as all 3 refuelling hoses were trailed and we had just obtained the tender form for aquiring one that week.

November the 25th 1993 was a freezing cold and misty day. The landing for XL231 (as we now knew the identity) was scheduled for 11.00hrs. The handling and fire teams had arrived the previous evening from RAF Marham and Upavon. Most of the guys were billeted in the museum's NAAFI and I well remember the fire men in their string vests and sleeping bags! One of the fire men (Jamie Mackay) has stayed involved with the Museum and the on-site fire team since then. We had spent the day before delivery clearing bushes and debris away from the peri-track and generally making the site clear for XL231.

Due to the weather the delivery flight was delayed until the afternoon. Our guest for the landing was Vulcan pilot Martin Withers as he had plenty of experience of Victor's during the Falklands War of 1982. Martin spoke to the press about his memories and of course he then went on to fly Vulcan XH558 once it returned to flight in 2007.

XL231 arrived over Elvington from the West via Church Fenton's air traffic control at 14.00hrs. My first thought when I saw the landing lights in the distance was " What the hell have we let ourselves in for??" I had an overwhelming desire to run and hide!
Once the the panic had subsided XL231 carried out several flypasts, wheels up then wheels down and what a noise it made!! Most car alarms in the spectators carpark were going off like crazy with the vibration. Steve Jenkins and crew really did crank her around the circuit, with lots of power on she perfomed like a fighter. 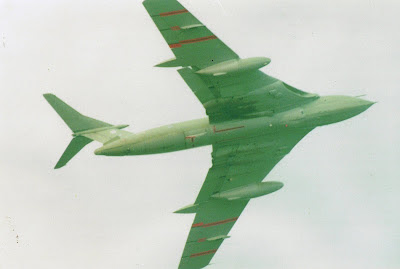 Her final landing was from the West and touchdown was at 14.20hrs and the tail braking parachute was used, pretty needless on the length of runway but good to watch. She was brought to a standstill at mid-runway and the Crew chief climbed out along with Steve Jenkins, he had been in the Right hand seat and the Left hand seat was occupied by Flt Lt Tim Butler (1st pilot). 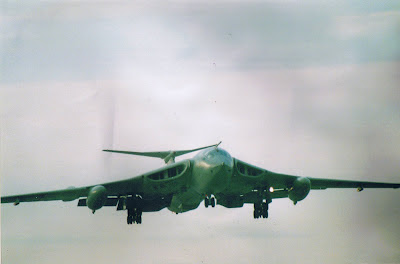 Suitably attired for the event I climbed onboard and into the Right hand seat for a couple of high-speed taxy runs with XL231 still under RAF ownership. Tim Butler gave her a mighty blast up and down the runway sending up sheets of spray, he allowed me to handle the throttles but not much else. I was a Victor 'novice' at this point. Tim taxyied her up to the Museum rampway and was about to attempt to taxy her into the Museum but the Crew chief (Paul Covell) plugged into the external intercom and advised against it. Particularly as he was concerned that she may ingest debris into an engine and of course we had plans to keep her 'alive' and working. 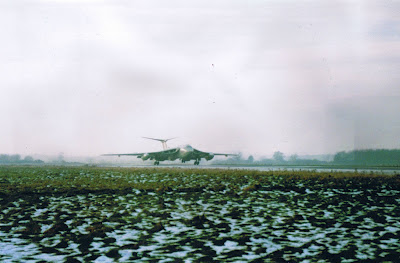 In the end she was towed into the Museum by tractor but this was not without its calamities. The tractor mis-judged a turn and one main undercarriage sank into the mud. Much digging and cursing and she was safely back on the concrete and moved into the museum. Glasses of champagne were then passed around the crew to celebrate the arrival of XL231 'Lusty Lindy'. 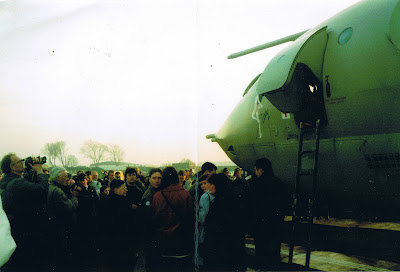 The delivery crew were; 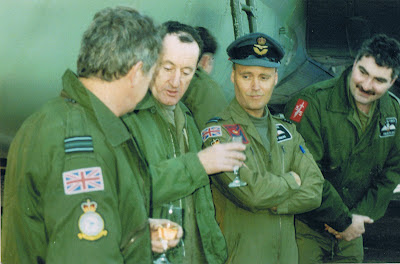 The next morning I met the Crew Chief and his 'make-safe' crew at the Museum. He talked in length about what he had to do and he was extremely good at making sure XL231 was left in a good state and still in 'Live' condition. Basically his team had to remove and disarm the ejection seats and discharge certain gases namely Oxygen which is extremely dangerous and certain Nitrogen systems for safety reasons. They also removed certain radio equipment needed for other aircraft types. Fortunately we have been able to refit all removed equipment over time and XL231 is 100% complete. The ONLY complete Victor K2 left in existance.

The final act on the 26th November 1993 was for me to sign the decommisioning paperwork and accept responsibility for the aircraft. Apparently the 'warranty' expired upon delivery!! The 'make-safe' crew then locked her up, handed me the cockpit key and loaded the towing-bar onto a flatback truck. We had to tender seperately in order to get a towbar from an MOD disposal site! No doubt the bar they brought to Elvington was sent off for scrap once it returned to RAF Marham and they also took the wheel chocks back as well. We had to use four railway sleepers to stop her rolling away for a few weeks until we scrounged some from RAF Brize Norton. 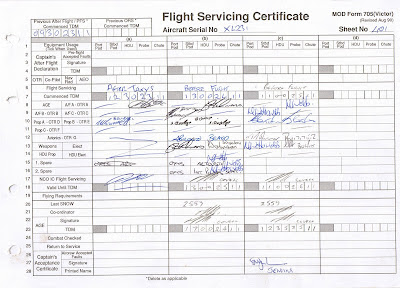 Last entry in the 700 signed by Sqn Ldr Steve Jenkins