The development of the HP.80; the Victor

Posted by Missppitstop at 19:09 No comments:

Thankfully over the last couple of weeks the weather has been relatively kind to us and we have been able to crack on with the starboard wing.


The morale building homemade rocky road and flap jack really has kept us going - it doesn't take much to keep us happy!

So with all that sanding, sanding and more sanding, how do we get rid of all the dust?

This is where the good old British summer has actually come in useful. The monsoon weather washes most of the dust away - at times turning the ground hemp.

For those hard to reach areas like dzus fasteners and panel lines the Miele 'Cat & Dog' vacuum is put to the test - do you think we can persuade Miele to launch a 'V-Bomber' vacuum, must be a market there???? 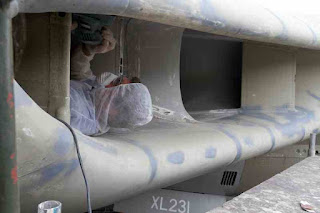 Its not often you see a Hawk pilot in this position! When not supporting the Hawk display team Ollie has been lending us a hand with, yes you guessed it, the sanding! 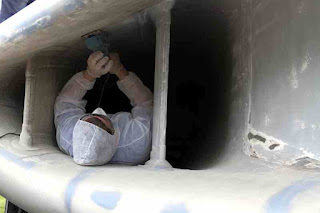 With a bank holiday looming we are expecting to be rained off this weekend. When painting a V-Bomber you do become obsessed with the weather. If the weather is kind we should see the starboard wing finished then on to the fuselage and the lady herself 'Lusty Lindy'.

Follow the progress of the repaint here Never Again part 5﻿﻿﻿﻿ 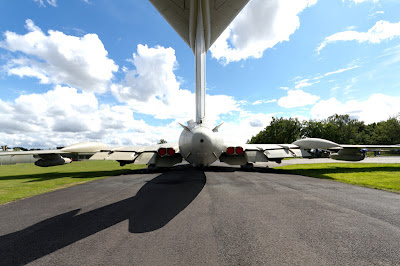 Now summer has half appeared progress on the repaint is coming along well.

The port wing is finished, other than the roundel and is looking fantastic! 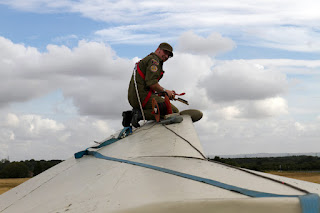 Whilst the rest of the team turned their focus to the starboard wing, Graham 'volunteered' to take on the tail - at 28ft high he's a braver man than me! 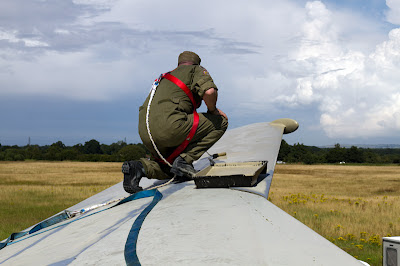 Progress was going well until............ out of know where lightning hit the ground about 100 yards away from where we were working, followed by the loudest sonic boom we have ever heard, scaring us all half to death! 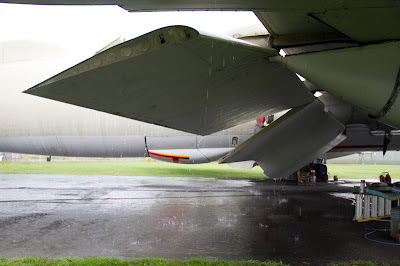 Then the rain came (yes, the great British summer strikes again!) we took shelter under the largest umbrella in Yorkshire and out came the morale building homemade rocky road cake. 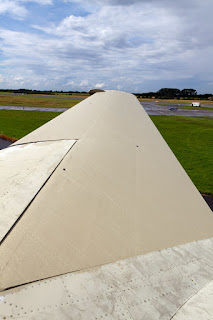 Thankfully the rain didn't last long and with the increased humidity it didn't take long for Lindy to dry off and work could continue once more.


You really can see the difference a lick of new paint has made.

With the tail now finished Graham has now returned to terra ferma but not before giving you this unique shot.
Posted by Missppitstop at 21:11 No comments:


The Iron Maiden is the only traction engine to have starred alongside a V-Bomber in the 1962 film of the same name. 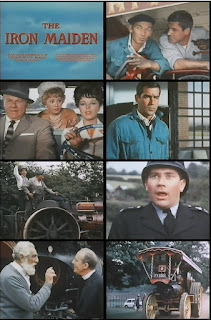 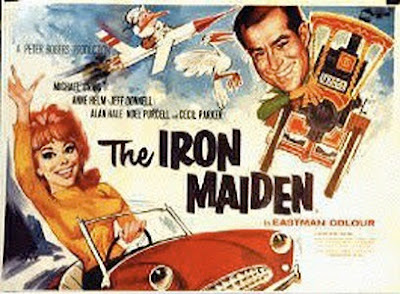 The film follows Jack an aircraft designer with a passion for traction engines. His boss is eager to sell a new supersonic jet plane, Handley Page Victor, Jack has designed to an American millionaire Paul. Their first encounter goes badly and tensions heighten when Paul's daughter damages Jack's prize traction engine 'The Iron Maiden', rendering it impossible to drive solo. Jack is desperate to enter a steam rally but his fireman is injured, when all seems lost Paul steps in and they become firm friends. After an 'eventful' journey they arrive at the rally but last minute Paul is injured and unable to participate, just when you think all is lost Paul's daughter arrives and they drive the Iron Maiden to take first prize. In true cliched style the two share a kiss and The Iron Maiden boils over!


Unfortunately there are very few stills from the film but I have managed to come across this one....


'The Iron Maiden' is a Fowler 7NHP Showman's Road Locomotive and now calls The Scarborough Fair Collection home.
﻿﻿﻿﻿
The engine was built in September 1920 as a road locomotive of the R3 class, with the works number 15657 and the registration number FX 6661. It was supplied new to F Barnes Ltd of Portland, Dorset for various duties including hauling heavy blocks of stone from the nearby quarries down to Portland Harbour.

She was sent back to the Fowler factory for a complete overhaul and conversion to full showman's specification. Once completed she entered fairground service with Mrs H. Oadley of Alfreton, Derbyshire and passed into preservation in 1952 when 'Kitchener' as she was then known was sold to John Crawley, the highly respected steam engine preservationist from Bedfordshire.

She received the name 'The Iron Maiden' for her starring role and has carried it ever since. Mr Crawley sold her on to Mr George Hawkins of Wadebridge, Cornwall. ﻿

In the early 1990's she passed in to the ownership of Dr Tony Marchington who commissioned a restoration. Since being purchased by Graham Atkinson in 2003 much more additional restoration work has been carried out to keep her in fine shape.

Today, she still carries the famous legend 'Mighty In Strength And Endurance' and continues to attract considerable interest both at home and on her travels abroad. The Iron Maiden visited Elvington in 2004 for a photo with 'Lusty Lindy' reuniting with a Victor once more.


The Victor which starred alongside 'The Iron Maiden' was XL230. Richard Thorpe better known for his roles in Emmerdale and The Dambusters portrays the test pilot.

XL230 and all the crew were lost on 10.5.1973 when the crew lost control and rolled over into the airfield during a night touch and go at RAF Wyton.     Lest we forget.

Posted by Missppitstop at 19:20 No comments: