The Green Satin Doppler navigation system had been playing up for a while and as there were no spares we couldn't do much about it.

However recent spares acquisitions brought 2 control units and one was removed from XL231 in May 1993 for probably bay servicing. The Form 731 was signed by Andy Price, the same Andy price that painted 'Lusty Lindy' on XL231 and who also painted the other Gulf War Victor 'Nose Art'.

The original unit was removed and within seconds of switching on the replacement it was obvious it was working in some capacity, the speed ran down to zero and the memory lamp went out after a while (it was stuck in memory on the old unit). Drift began to indicate and the neon row of lamps started to work. 100% better than the old unit. I then switched off because the cooling fans need to be checked on the Computer and Transmitter/Receiver trays  before we go any further. These are located in the rear freight bay. However, all signs seem good! 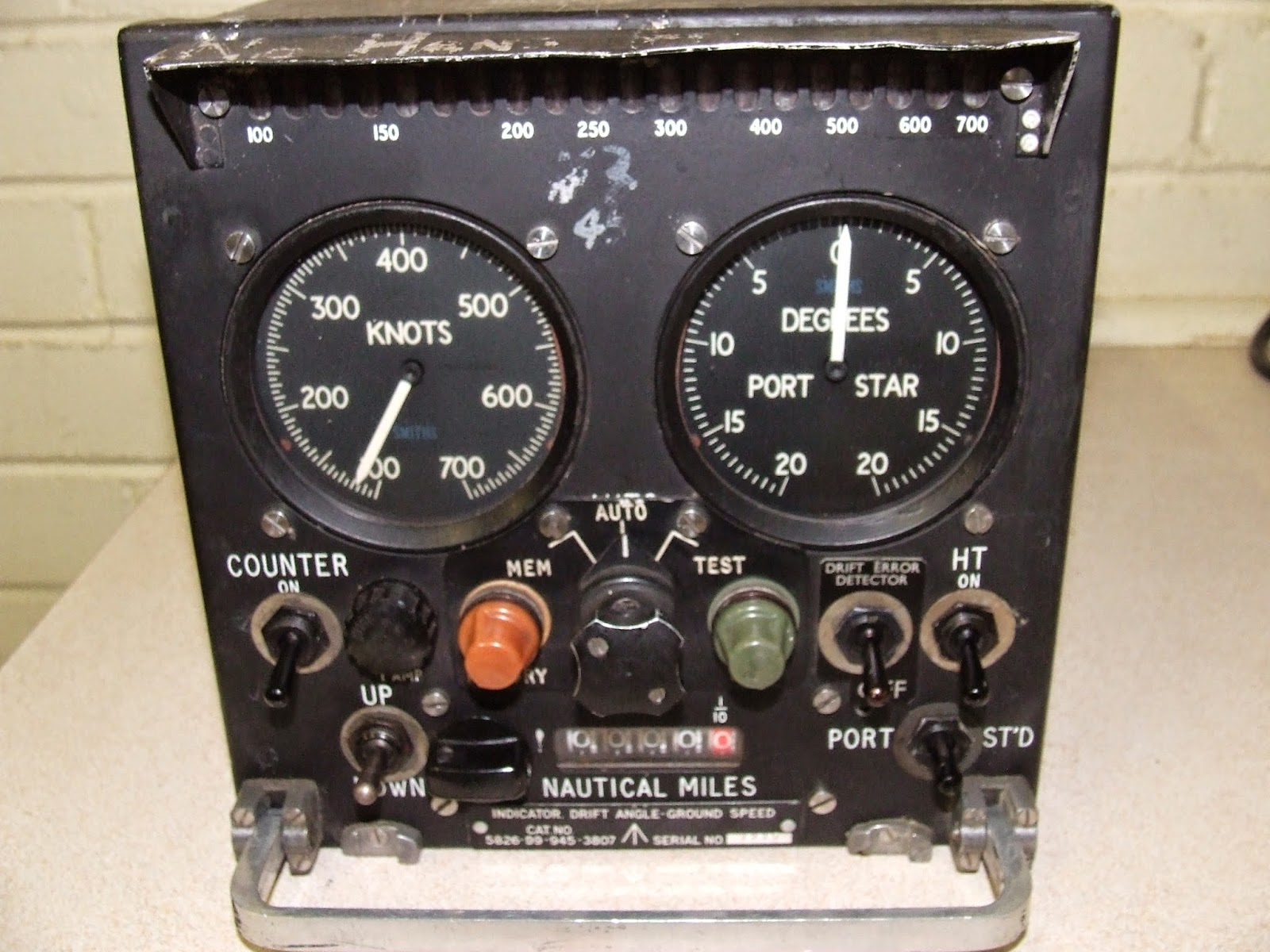 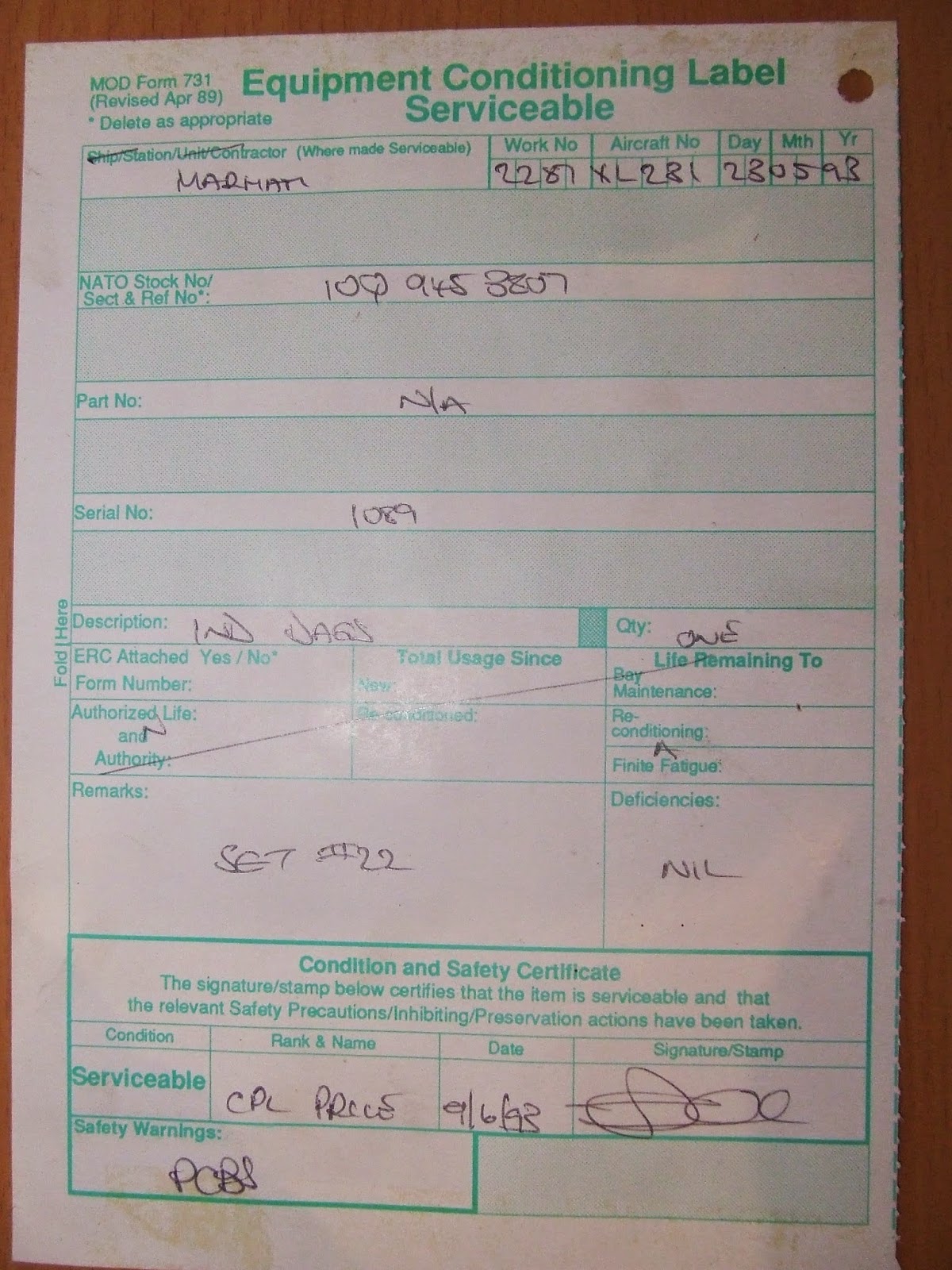 Posted by Missppitstop at 23:50 No comments:

A colleague on the Victor Team (Corporal Andy King) obtained these from a fellow armourer who had removed them from Gulf War veteran XL164 'Saucy Sal' after she had been retired for crash rescue duties to RAF Brize Norton and they have now been donated to XL231 by him. 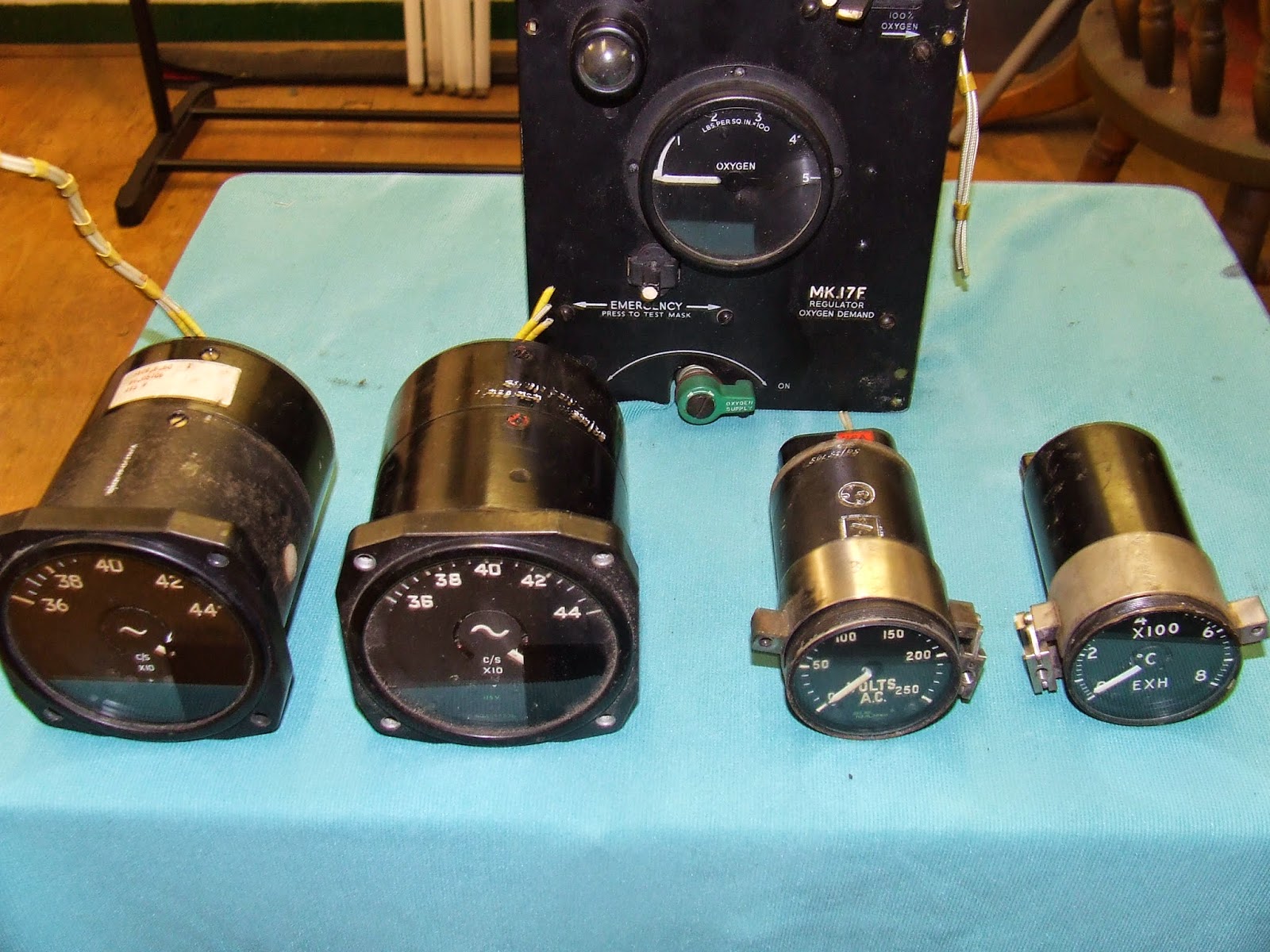 Spare parts are vital for the long term well being of XL231 as she is far from being a 'dusty museum exhibit'.

XL164 survives as a cockpit section only which is a great shame as she was the lowest houred Victor K2 on 55 Squadron. 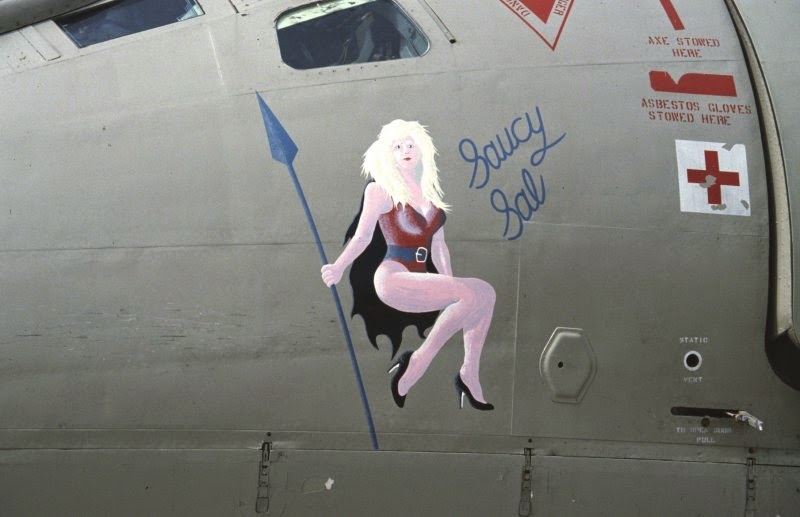 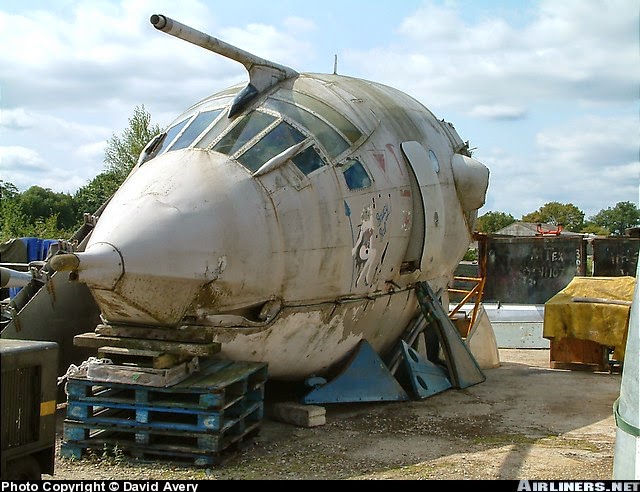 Posted by Missppitstop at 22:23 No comments:

Much needed spare parts continue to be donated and acquired for XL231's continual survival as a working 'live' aircraft.

Some parts are generic and some are totally type specific for the Victor K2, it is the latter that we are always keen to obtain. The below have been kindly donated by The Vulcan Restoration Trust (VRT) at Southend and were removed from Victor K2 XH671 'Sweet Sue'. She saw heavy action during the Gulf War of 1991 and sadly was written off at RAF Marham in 1993 after the crew door blew off during a routine cabin pressure test. She was however displayed statically for HM The Queen's Review at RAF Marham with the door 'lashed' back on for the parade because she had been cosmetically prepared ready for the event beforehand. She was scrapped soon afterwards. 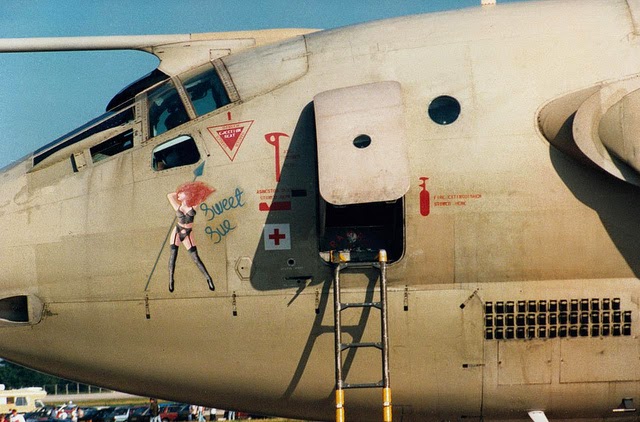 Type specific parts include these; They are the automatic control boxes for 2 Victor Conway engines and left to right are; Start in Progress light and Turbine Overspeed control, Engine Air Bleed Valve control and the large lower unit; Jet Pipe Temperature (JPT) Control Amplifier. The first unit is basically to provide a rotation light for the pilot during the initial stage of engine start, it doubles up to warn the pilot of a turbine overspeed of the engine at high power and he would immediately reduce the power setting in order to protect the engine. The second unit closes an air bleed from the engine at a power setting of 88% and above ( the power setting is used to determine if the engines are 'serviceable' for takeoff). Air bleeds are used for cabin pressurisation, bombay heating and anti-icing etc. But need to be closed during takeoff as any air being bled off reduces the engine power output. The valves re-open once the power is reduced after takeoff etc. The JPT amplifier automatically controls the temperature of the exhaust gases to keep the temperatures within limits at all power settings. However this can be manually over-ridden by the Captain if required. 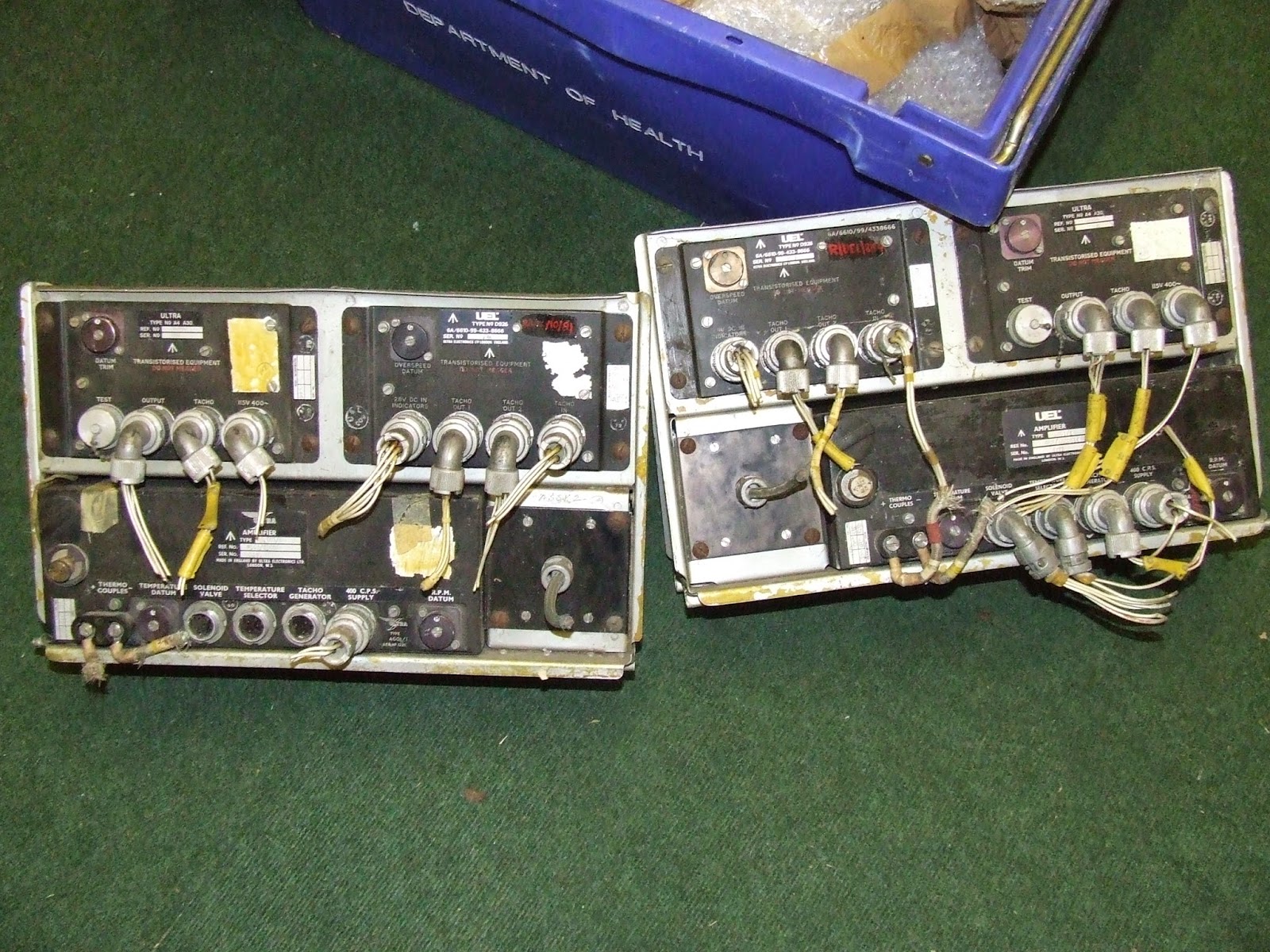 Posted by Missppitstop at 21:53 No comments: