We are now well under way with the sanding, more sanding and even more sanding followed by painting and more painting.

With 2012 being the wettest summer on history progress has been slow as 'rain stops play' every week, dampening our spirits and our sanding paper. We are hoping that monsoon season has finally come to an end and we can crack on.

So with the port wing finished I'm sure you would love to see some before and after shots and hear the anecdotes which have kept us going when the cries of 'are we nearly there yet' ring out.


Where do you start with an aircraft 114ft 11ins long and with a wing span of 117ft? The port wing of course! XL231's port wing is more visible to the public plus it is slightly more accessible as no other aircraft are parked on that side.


Preparing the intakes is one of the most awkward, time consuming and dirty jobs to do. Once you've made your way to the top of the steps, then to the edge of the intake 10ft above the ground, you then have to manoeuvre yourself actually into the intake - easier said than done, as you feel yourself sliding towards the engine with nothing to hold on to!
﻿﻿﻿
I had just managed to manoeuvre myself deep into the port intake when my mobile phone rung......on the ground where I had left it "For f*$#'s sake" was greeted with "Ey lad i've 'erd worse from't Victor intake" after pulling myself out of the intake I looked down to see a south-Yorkshire ex-Victor 'liney' from the B2 days, at Wittering, smirking back at me! 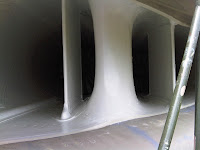 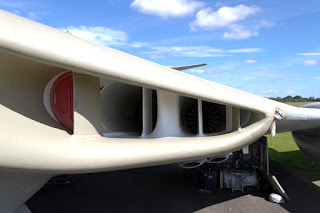 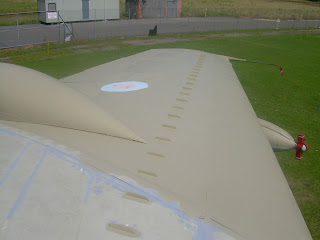 With flaps this size it really is all hands to the deck - and just when I thought I had managed to avoid the camera! Just to prove a Miele cat and dog vacuum is just as effective on Victor sanding dust! 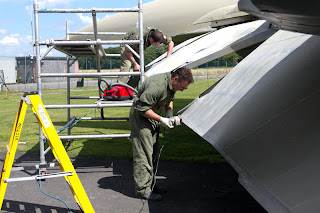 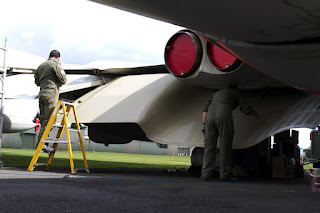 Harking back to her pre-hemp days we keep finding green paint, even though a so called expert claimed they were bare metalled before painting in hemp!


So after 6 years, can you spot the colour difference! With the port wing finished we have started on the starboard, then onto the tail, with the fuselage last.

Posted by Missppitstop at 20:26 No comments:

Chief Technician Chris Sands was an Aircraft Servicing Chief or for short 'Crew Chief' and his allocated aircraft was XL231. Prior to the Falklands War he and his crew, of 232 OCU, RAF Marham, made a memorable trip to Houston in Texas in XL231. 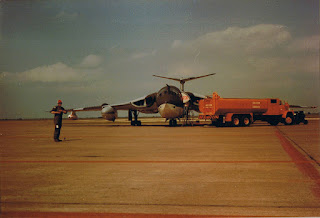 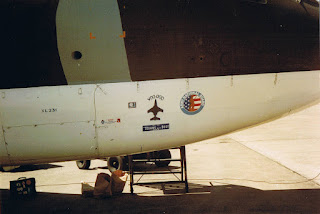 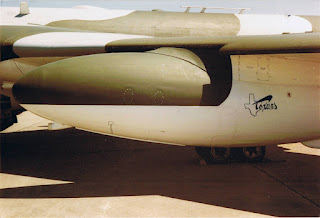 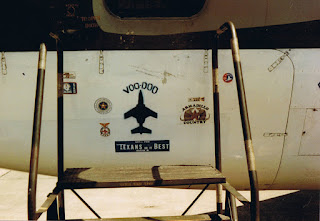 XL231 at Ellington Air Force Base, carrying a few 'momentos' of her trip!﻿

XL231 and the crew played a significant part in the Armed Forces Open House and Air Show at Ellington Air Forces Base on April 17th 1981.

"The members of the Victor crew were truly Good Will Ambassadors and should be commended for their exemplary representation of the Royal Air Force" Maurice H. Udell, Director General, Houston Chamber of Commerce 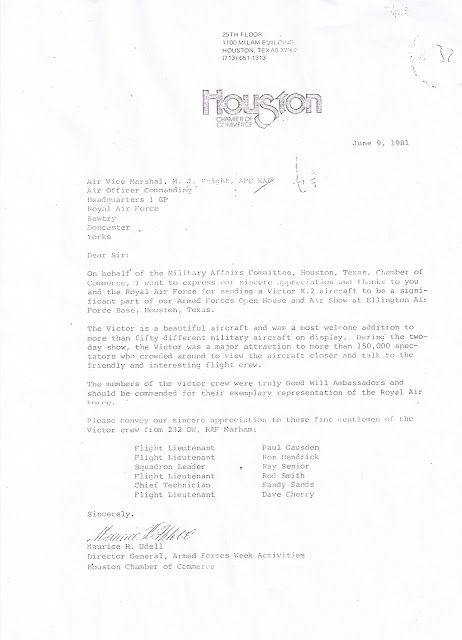 The crew received a number of thank you letters from spectators of the show, who numbered more than 150,000.

"It was indeed a real treat to see that beautiful aircraft grace the runway alongside our aircraft and we wish to show our appreciation that you should send someone here to represent your country and show our alliance with one another. And the crew did a beautiful job of it, they were very polite, easygoing, very friendly and eager to show us their plane and how it works and to answer questions" David L Pena, Houston, Texas, 18th April 1981﻿ 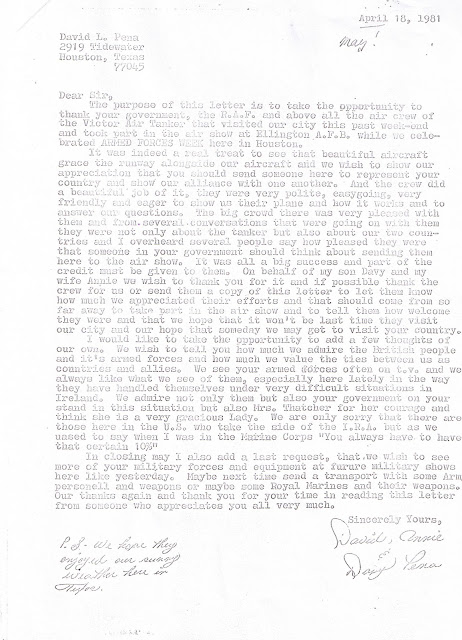 Flt. Lt. Gausden said "There was a tremendous interest shown by the Americans in the Victor tanker. It was a very good public relations exercise from our point of view and we talked ourselves to death!"﻿

A tour of the Lyndon B, NASA facility at The Johnson Space Centre was also included in the trip, after the crew had completed an air-to-air re-fuelling exercise to Goose Bay in Canada. 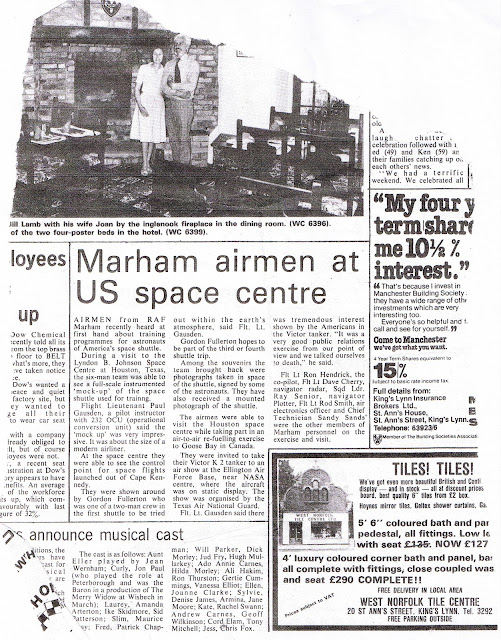 Chris graciously donated his 'memorabilia' for inclusion in the Victor XL231 archives.
Posted by Missppitstop at 16:08 No comments:

Original footage of the Victor fleet during Operation Desert Storm 1991

Posted by Missppitstop at 13:26 No comments:

"Never again" those were the words I said 6 years ago after the last re-paint..... and guess what I'm back here again! Several weeks in and the wettest summer in history and I remember all too clearly why I uttered those words.

This will be the third time XL231 has undergone a full re-paint in the 18 years she has been out of service, we're all older and wiser (well maybe not!) and fully prepared for the sore knee's, dust and countless hours of sanding.

With 2012 marking the 30th anniversary of the Falklands we had hoped to have put the old gal back in to camouflage but unfortunately it would have proved just too costly and in hindsight it was the right plan as with rain stopping play every week since we started you would have seen us still applying that grey/green this time next year!

During XL231's 50 year span she has donned several colour schemes: 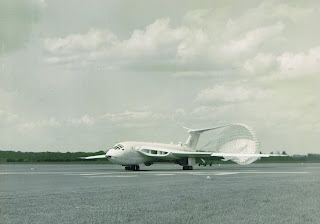 Anti-flash white from 1962 - 1964 for her nuclear role, designed to reflect nuclear flash. 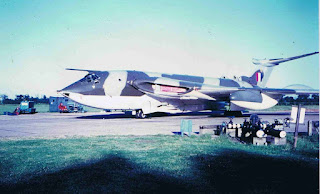 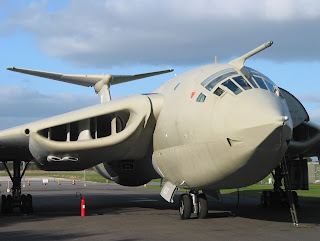 So how do you repaint an aircraft with a 2,406 sq ft wing area, a tail 33 ft high and that iconic nose art? First you rope in some 'willing' volunteers, including; Ian, Pete, Graham, John, Christine and a special mention to Rich, who decided very early on who needs holidays and weekends when you can paint a V-Bomber! Then comes the prep - sanding, sanding, sanding and more sanding and just when you think you've finished sanding even more sanding! Nothing fancy just a mountain of 120 grit paper and enough sanders to give B&Q a run for their money. One thing a wing area that size does is 'eat' sanders - so if there are any generous people who would like to donate a couple of sanders to the project we would love to hear from you.

Then comes the primer. Any flaking paint or corrosion is taken back to bare metal and treated. After over 18 years stood outside, taking everything the Yorkshire weather can throw at her Lusty Lindy is in fantastic condition. There was some very minor corrosion on some of the rivet heads and fasteners but other than that all panels are free from corrosion, a real tribute to British engineering and the countless hours we have spent tending to her over the years.

Next, the paint - synthetic enamel; hemp upper, light aircraft grey undersides and white intakes, all applied by roller. Look out for part 2 of the blog detailing the work done..............


Find out how progress is going here 'Never Again' part 2
Posted by Missppitstop at 18:27 No comments:

Flt Lt Mike Wood was a co-pilot on Victor K2's with 57 Squadron from September 1977 until December 1982. Following the Captain conversion course on the OCU he joined 55 Squadron until April 1985.

Mike and his crew were deployed to Ascension Island in the South Atlantic in mid-April 1982 for the Falklands Conflict. Along with his pilot Wing Commander Barry Neal their initial role was Maritime Radar Reconnaissance including tanker sorties both at night and during the day. The most famous of their tanker sorties being the legendary 'Black Buck 1' attack on Stanley which saw numerous air-to-air refuelling in order for the loan Vulcan 607 to make its successful attack.


Throughout his time in Ascension, Mike was never without his companion and crew mascot 'Mole'

Mike flew XL231 a number of times during his career. The list below details those flights after the Falklands conflict.

23/01/1984  ASI to ASI Option 8 refuelling a C130 bound for Port Stanley. When the C130 broke contact he left his probe tip in our centreline hose refuelling basket and the tip was recovered on our return to ASI.


In April 1986 Mike was posted to Central Flying School at RAF Scampton to train as in instructor on Jet Provost Mk 3 and 5 and completed his last tour at RAF Church Fenton. He continues to spend the remainder of his flying career in commercial aviation, with 17 years flying for Cathay Pacific Airways in Hong Kong operating B747 200, 300 and 400, Tristar and Airbus 330/340 and 340 -600. He is now in his 8th year with Jet2 based at Leeds Bradford flying B757 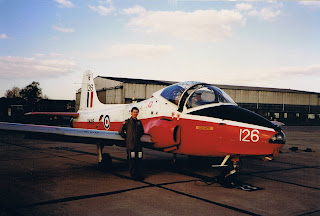 Mike continues to be actively involved with XL231, riding in the Crew Chief seat on the last high speed run and recently obataining a complete refuelling panel for us.


Posted by Missppitstop at 14:57 No comments:

Original 1953 film showing just how state of the art the Victor was!