Victor Squadrons from November 1957 to October 1993

No. 10 Squadron: Formed on 1 January 1915 at Farnborough, Hampshire, No. 10 Squadron had been flying Canberra B Mk 2s for four years (including combat operations during the 1956 Suez Crisis) when it was disbanded for the third time in December 1956. It was re-activated at RAF Cottesmore, Rutland, in April 1958 to become the first operational unit equiped with Victor B Mk 1s. It later converted to B Mk 1As and flew these aircraft until it was selected to become the first VC10 squadron. Prior to being disbanded in March 1964, No. 10 Squadron sent a Victor detatchment to tengah, Singapore, as part of the show of force during the confrontation with Indonesia over North Borneo. After being re-formed as a transport squadron and relocated to RAF Fairford, Gloucester, it received its first VC10 in July 1966.

No. 15 Squadron: Formed at South Farnborough, Hampshire, on 1 March 1915, this squadronhad been flying Lincolns and Washingtons during the early '50s before converting to Canberra B Mk 2s in May 1953. Disbanded in 1957, No. 15 squadron was re-formed at RAF Cottesmore in September 1958 to become the second squadron to fly Victors, first Mk 1 and the Mk 1As. Like No. 10 Squadron, No. 15 flew Victors to Singapore and Malaysia during the 1963-64 confrontation with Indonesia. After the last of these deployments, Victor B Mk 1As were withdraw and No. 15 Squadron was disbanded in October 1964.

No. 55 Squadron: Formed at Castle Bromwich, Warwickshire, on 27 April 1916, this Squadron was disbanded for the second time in Greece in November 1946. No. 55 Squadron was reformed with Victor B Mk 1As in September 1960 at RAF Honington, Suffolk, but remained in the bomber business for less than five years. During that period, it was one of the four Victor squadrons deployed to the Far East during the confrontation with Indonesia. In May 1965, No. 55 became the first squadron to convert to B(K) Mk 1As. Relocated to RAF Marham, it flew K Mk 2s from July 1975. With these three-point tankers it played an active part during the Falklands conflict in 1982 and in 1990-91 was part of the British contribution to Desert Shield and Desert Storm. Its last K Mk 2s, the final Victors, were retired on 15 October 1993.

No. 57 Squadron: Formed at Copmanthorpe, Yorkshire, on 8 June 1916, this squadron had been flying Canberra B Mk 2s for three and a half years when it was disbanded at RAF Coningsby, Lincolnshire, in December 1957. Reformed at RAF Honington in January 1959, No. 57 received Victor B Mk 1s in March 1959 and B Mk 1s during the following year. Like Nos. 10, 15 and 55, No. 57 Squadron sent Victor detachments to Singapore during the confrontation with Indonesia. No. 57 became a tanker squadron when it converted to Victor K Mk 1s in December 1965. It switched to K Mk 2s 10 years later and flew these last Victors until being disbanded on 30 June 1986. 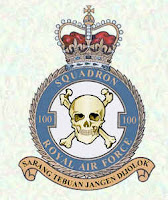 No. 139 Squadron: Rather unique among RAF squadrons as it was formed in Italy as a fighter-reconnaissance squadron on 3 July 1918, this squadron converted from Mosquito B Mk 35s to Canberra B Mk 2s in November 1953. After switching to Canberra B Mk 6s, the squadron was disbanded at RAF Binbrook, Lincolnshire, in December 1959. Reformed at RAF Wittering in February 1962, No. 139 Squadron flew Victor B Mk 2s until it was disbanded on 31 December 1968.

No. 214 Squadron: This Royal Naval Air Service squadron came into being in France in December 1917 when No. &A Squadron, RNAS, was renumbered. Disbanded after flying Lincolns in 1950-54, No. 214 Squadron was reformed in 1956 at RAF Marham with Valiant B Mk 1s and took part in operations against Egypt later in that year. Beginning in February 1958, No. 214 Squadron pioneered tanker operations with Valiant B(PR)K Mk 1s. Disbanded as a Valiant tanker squadron in 1965, No. 214 was reformed on 1 October 1966 with Victor K Mk 1s. It was disbanded on 28 January 1977.

No. 543 Squadron: Formed on 12 October 1942, this squadron flew photographic-reconnaissance Spitfires until being disbanded in September 1944. It was reformed at RAF Wyton in April 1955 to fly Valiants B(PR) Mk 1 strategic reconnaissance aircraft. The Valiants were replaced by Victors SR Mk 2s in May 1965, No. 543 Squadron was disbanded in May 1974.