The repaint of XL231 took over 6 months to complete, a mountain of sanding paper and gallons of paint but the hard work was certainly worth it.﻿

Posted by Missppitstop at 19:26 No comments:

It's Not Impossible - by Amy Parkin

Welcome to our first guest blog of 2013, by HUGE V-Force fan Amy Parkin.

I often visit museums and drive past airfields to be faced with unloved planes. I read articles about neglected aeroplanes and aircraft graveyards; it breaks my heart seeing some of my favourite planes in terrible condition. One example of terrible condition is the infamous A1 Lightning, XN728. I saw this old girl in person when I was little, and it was heartbreaking to see her like that. She was eventually scrapped in 2011, after spending many miserable years on a yard in Balderton, Nottinghamshire. The poor girl was in fair condition when she arrived at the yard 30 years ago, however she was gradually stripped down and became victim to vandalism. It’s a relief to see she’s been scrapped, not usual vocabulary I’m comfortable with but I feel aviation enthusiasts, like myself, may feel the same way. I won’t lie, I felt wounded by her state, that’s why it is such a relief to hear she’d been scrapped. 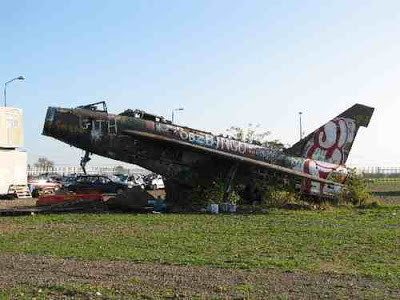 I understand that not everyone loves planes, and they don’t really care what state they’re in, or how they should look… But I don’t really understand what drives a person to want to treat something so beautiful, so badly. However, lots of Lightnings have been restored, including XS417 (based at Newark Air Museum). She has been restored to noteworthy status and I must say… XS417 looks absolutely stunning. 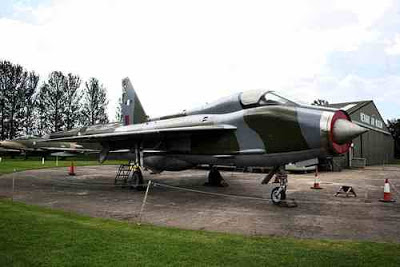 I took this picture on August 4th 2012, and I believe she was about half way through her restoration and she looks just absolutely wonderful.

There are a lot of planes that could do with just a little polishing off or even just a couple coats of paint. But for some reason it just doesn’t happen enough. Most of the surviving Vulcans, with the exception of XH558, XM655, XL360, XL426 and XM607 (I apologise if there are other Vulcans that are well looked after but those 4 are the only ones I’ve seen looked after…) aren’t really looked after… Or I don’t think so anyway. All they need is a little scrubbing down… Surely owners, museums, whatever, can just give them a spring cleaning?! I don’t know… Maybe they do, but I don’t see any clean pictures of certain Vulcans and when I’ve visited some museums, their Vulcans aren’t clean! There should be like a team of volunteers that just go around air museums and such places and just clean the aircraft, maybe even do the painting and all that jazz. I understand it must be a difficult task trying to fix and restore an aircraft… But it’s not impossible.

Take Lusty Lindy, Handley Page Victor, XL231 for example; Look at what Andre Tempest and his team of volunteers have achieved! 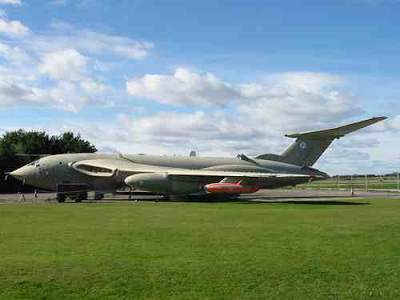 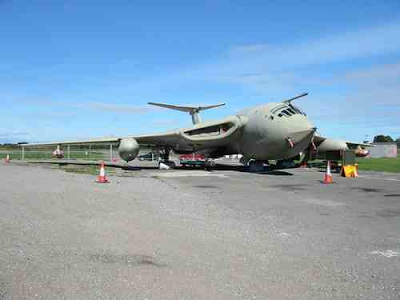 (Photos taken by my dad)

She still looks fantastic in these photos… But after a good sanding down and a full repaint and she looks stunning. Now, I’ve only seen the pictures but even they blew me away! 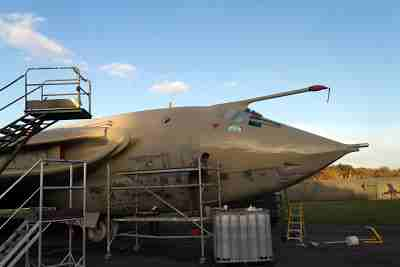 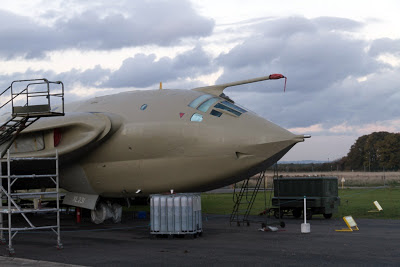 Lindy all masked up during the repaint, to preserve the original and iconic nose art! 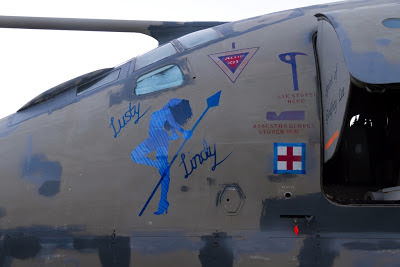 Here she is without her nose art… She doesn’t look right! 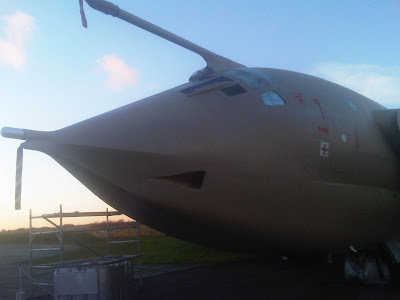 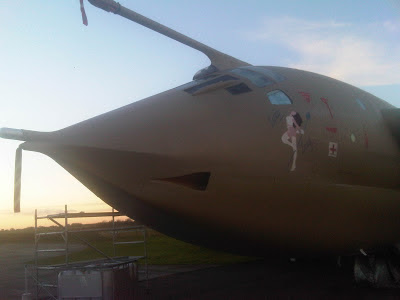 The last time I visited Lindy, I was 9 and I was taken back by her beauty. Futuristic yet menacing, however she still looked graceful. I’m 19 in 2 months, and I plan to visit Lindy within the coming months and I’m excited! Even though I’ve never actually seen a Victor fly, they’re still one of my favourite aircraft. There’s just something about Victors. 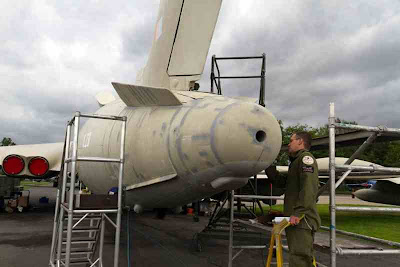 Ollie is a Hawk pilot, who supported the 2012 Hawk Display team, he is also another dedicated member of Andre’s team! Here he is sanding down the intakes! 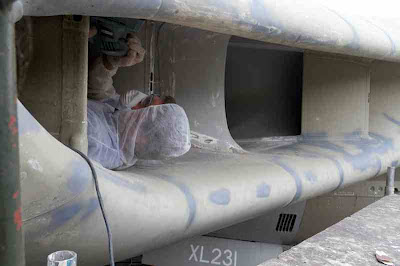 Back to my point… Andre and his team have proven that it is not impossible to clean up an aircraft, now I’m not saying that Lindy was in horrible condition, because she wasn’t, but it’s clear that the team looking after Lindy are enthusiastic, passionate and most of all willing and that’s refreshing to see that. If there was anything ‘abnormal’ upon XL231, like corrosion, so on… It was dealt with correctly. Stripped bare and fixed, the team have been hands with Lindy’s repaint for the majority of 2012 and their constant hard work has really paid off.

Graham, one of the braver volunteers in Andre’s team! Here he is working on Lindy’s tail at 28ft! 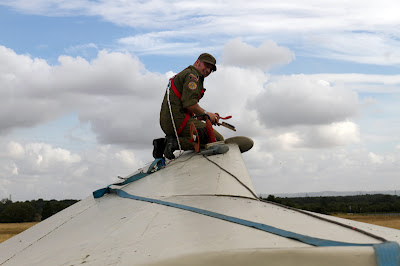 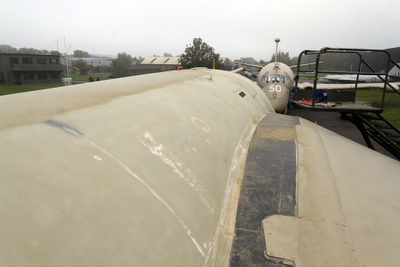 Lindy getting a wash down, even in the bad weather! 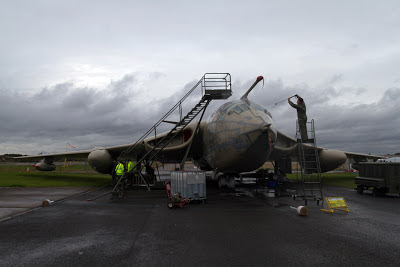 I’m very thankful to the dedicated team that have fixed Lindy up, because as a part of the younger generation involved with aviation, for me and having never seen a Victor fully operational, it’s wonderful to see such a beautiful aircraft being restored, well looked after and often powered up. 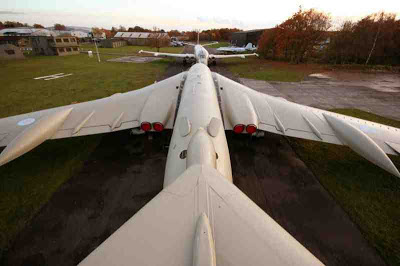 This year, Andre and his team are looking to fast taxy Lindy, to display their fantastic efforts. Personally, I am super looking forward to seeing Lindy taxy at high speed because it’s something I’ve wanted to see for such a long time and just when I don’t think it can get any better…. They’re taxying her in Yorkshire… OOOOSH. My Home County, baby! I cannot wait for this event!

However, there is a slight downside… Aviation fuel is A LOT more expensive than regular fuel… Andre and his team are looking to raise around £5,000 so that they go forward with this event. Right now, I don’t have the money, but as soon as I do, I will be donating… Please, if you can… Just spare some money and donate it to the team, they deserve this, and so much more! For more information on Lindy’s high speed taxy run and information on donating please click here!

Also, a big thank you to Andre for allowing me to use his photos!

Back to my idea of a voluntary cleaning team, I am genuinely willing to do something like this. I seriously cannot think of anything better! If someone asked me “Amy, I have this plane, it needs cleaning and a coating of paint, can you do it?” I would be so excited! I’d pretty much bite their hand off to do it.

Now I understand that some times it’s nice to just leave something as it is but it just breaks my heart to see planes being mistreat/improperly looked after. Like I already said, I know that not everybody is a fan of aviation but seriously, but I don’t understand why the owners won’t even do it? Again, it is not impossible.

Would you become a part of a voluntary team who shares the passion of aviation? Would you be willing to clean and restore aircraft voluntarily?

P.s I’m so proud that I came up with, ‘Dusty Lindy’ I’m still laughing. I’m an idiot. Hahaha.
Posted by Missppitstop at 18:21 2 comments: 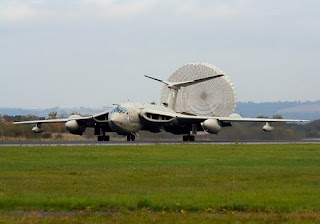 We are looking to perform a high speed taxi run but in order for 'Lindy' to achieve this we need fuel for her tanks.

2013 will be a land mark year, after owning Victor XL231 for 20 years, her owner, Andre Tempest & her devoted volunteer crew are very proud to say that she is more serviceable than ever.

To mark this significant occasion we would like to display XL231 in all her glory with a high speed taxi run! Unfortunately aviation fuel is expensive so we are seeking sponsorship and donations to help cover the associated costs of this taxi run display.

Any donations would be very gratefully received so please


We are hoping to raise £5,000 which would go a significant way towards covering the costs of a high speed run.


Keep an eye on the blog or follow us on twitter @victorxl231 for details of the run as they become available. 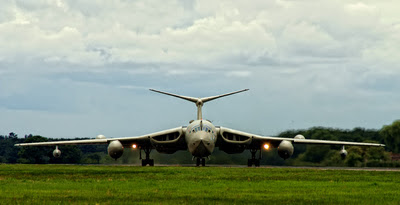 Thank you
Posted by Missppitstop at 19:30 No comments: