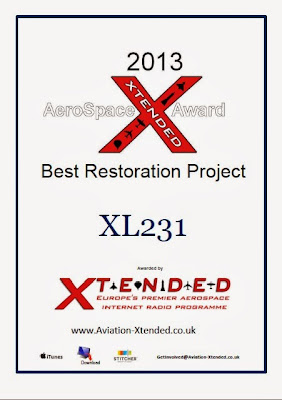 2013 has been a significant year for '231 and the team; with us marking 20 years since Lindy made her final flight and the honour and responsibility for her upkeep passing to myself and the team. With no RAF Stores at hand or Government financial backing to help look after a V-Bomber there have certainly been challenging times. But 20 years on, three re-paints under my hat and an intimate knowledge (yes, I have been in places you would not even believe possible!) of the air frame and systems I'm proud to say that Lindy is as serviceable as she has ever been.

Lindy proved that at 52 years old and having left the RAF 20 years earlier she still had what it takes to wow at her anniversary run in November.
However, maintaining a complex, 4-engine bomber is an on going feet, we will be sharing our journey on here and on XL231 work diary on the Key Forum as always please do drop us a line if you can offer any support - from picking the brains of ex-ground and aircrew, giving a financial or material donations, making flapjack for the team or lending a hand with a job we really do appreciate it. Thank you for your support in 2013.

The other very well deserving category winners were:


Posted by Missppitstop at 15:03 No comments:

Due to high costs it was decided that it would not be practical to fit Ejection seats for all crew members in the V Bombers.

Martin Baker did trial a full crew ejection seat system but due to varying reasons ,it was not put into production.

A system was therefore developed to assist the rear crew to be able to get out of the aircraft fast in an emergency situation.

This involved the development of a swivel 'Assisted Escape Seat' and this was retro-fitted to all Mk1 and Mk2 V Bombers after a number of fatalities caused by fixed non-swivel seating.

The seat was fitted with a powerful spring loaded back rest and a 'booster cushion' under the seat occupant. In order to operate the system the occupant turned the seat to face the door and pulled a yellow and black handle. 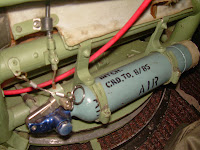 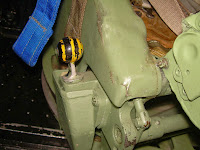 This discharged an air cylinder into the cushion which 'lifted' the occupant to his feet. But in order to vacate the aircraft the spring loaded back rest was sprung forward literally pushing and lifting the occupant to his feet and forward towards the open door. Prior to this the door had to be opened and in an emergency could be blown open by operating a door 'blow open' system operated by a shielded operating lever in the front of the AEO/NAV table. 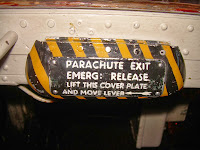 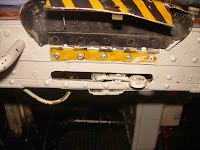 Once out of the seat and pushed forward the seat harness lap strap was detached from the seat and the occupant was heading out of the door attached to his parachute, emergency oxygen and PSP (personal survival pack). In order to clear the aircraft the leading portion of the crew door was thus designed to create a 'stall area' allowing the crew member to drop safely clear of the lower lip of the engine intakes.

This system was successfully used in genuine emergency situations.

I have spoken to many V Bomber aircrew over the years about the pro's and con's of the pilots having ejection seats. The general consensus how I interpret it, is that no pilot would ever leave his rear crew behind unless there was no practical hope that they would get out, such as the Vulcan accident at Luqa, Malta in 1975 where only the pilots were able to get out.
Posted by Missppitstop at 15:36 No comments:

As time goes by naturally consumables get used up.

Two such items that are essential to the upkeep of XL231 are bulbs and fuses. Mundane to some but essential to us. In fact some fuse sizes are more or less impossible to find now, so we naturally 'rob' aircraft about to be scrapped and generally try to find consumables from wherever we can.

If anybody is looking for a home for any bulbs and fuses regardless of amperage then please let us know!

Posted by Missppitstop at 15:36 No comments:

On Sunday Rick Gill tested the recently serviced HF (High Frequency) radio and ADF (Automatic Direction Finding) systems out and satisfied himself that between us we had them well sorted. In addition he ran the VHF & UHF systems and again all were fully up to speed. 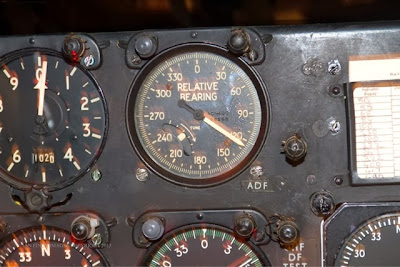 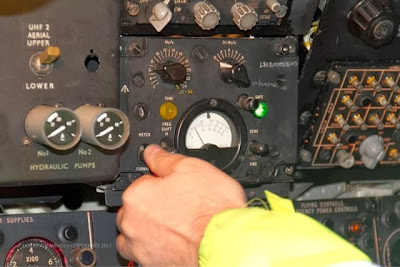 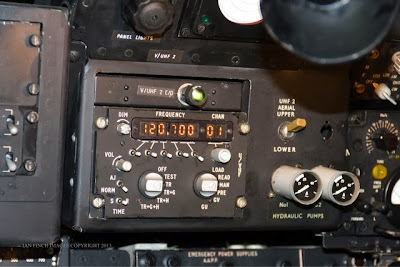 We all know that XL231 is unlikely to fly again and some of these systems are not necessary for us to be able to operate the aircraft.  However, XL231 is a historic and rare machine and she justly deserves to be as serviceable as possible. As her owner of 20years I probably know the type as well as is possible to do so and I personally would be more than confident in her ability to go airborne.
Posted by Missppitstop at 15:36 1 comment:

After a successful 20th Anniversary celebration it was back to servicing and maintenance.

The first job to tackle was replacing the HF Radio transmitter/receiver with a unit obtained from a 'straight out of service' VC-10.

XL231's original unit is in good condition but a little weak on transmission, so we decided to replace it with a better unit as we had managed to finally obtain a spare.

The unit is the 618T, originally a Marconi badged item but later a Collins unit and it is an extremely powerful item of equipment. Used in many military aircraft, it is one of the few HF radio's that is available. It is also a very bulky and heavy item.

During the Falklands War of 1982 it was this type of HF radio that the AEO in Vulcan XM607 used to contact the UK in order to confirm the successful operation to bomb Port Stanley Airfield.
Posted by Missppitstop at 20:15 No comments: