Due to re-surfacing on the runway, there will be NO taxy runs of the Victor or ANY of the Museum aircraft. ALL engines runs will be carried out on the museum site only until further notice. We realise that this may be a dissapointment to some but, it is a matter out of our control. Updates will be published.
Posted by Missppitstop at 00:09 No comments:

On Sunday an old friend made a return visit to see XL231. An aircraft he flew many times as part of Britain's Nuclear Deterrent.
'Red' Dunningham was Victor B2 QFI, 'Blue Steel' qualified and had  a very long and illustrious career in the RAF.
He started flying Harvards in South Africa before flying Spitfires and Hurricane's operationally. He then went onto the Meteor and Vampire Jet Fighters before commanding a Canberra Squadron.
He was personally selected for the V Force and Victor B2's by Air Chief Marshall Sir Augustus (Gus) Walker to be a Victor B2 pilot and he never regretted a minute of it!
I was lucky to able to take 'Red' on taxy run in XL231 a number of years ago and he was able to ride in the Co-pilot's seat.
'Red' is aged 93 now but, very much with it and apart from being a bit 'shaky' in the legs is bright as a button. The legs he puts down to running too many London Marathons!
He assures he will be back for further visits and we hope that he definitely is! 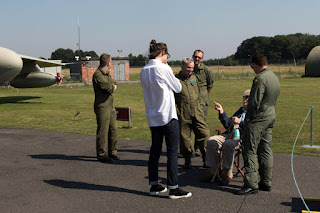 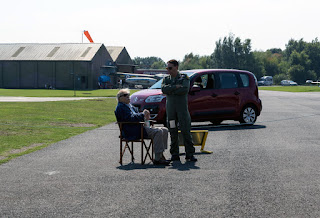 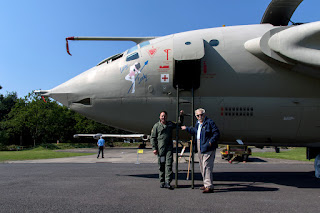 Posted by Missppitstop at 19:15 No comments:

Dennis Robinson posted the below fantastic pictures on facebook and has kindly allowed them to be shared here that he took of XL231 at RAF Luqa, Malta in the late 1960's. When XL231 was a B2R (retrofit) 'Blue Steel' missile capable aircraft. The top picture is the later one from 1967 with the Wittering Wing Lion on the tail and various aerial modifications not seen in the 3 earlier shots, taken between 1964-67 (Victors were camouflaged by 1964 after the V Force tactics changed from high level to low level operations) 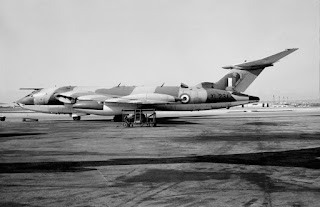 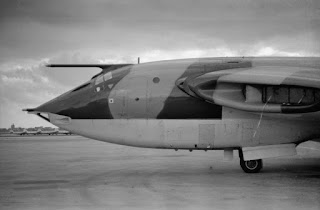 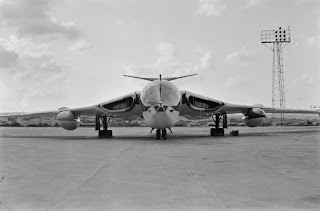 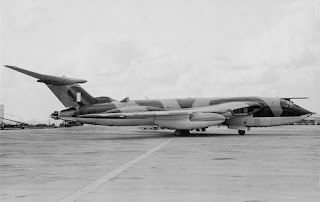 Posted by Missppitstop at 16:47 No comments:

Sunday August the 2nd was Engine running day for XL231 and all the 'live' aircraft at the Museum. There was no intended taxying on the runway planned for the event.

As I was intended to run the DC-3 Dakota after major engine work, I felt I had to concentrate on that, so I handed the Victor over to Ollie Suckling, Rob Langham and Rick Gill to run. Ian Finch carried out the Crew Chief duties. All went extremely well and no snags were encountered. At one point the nose Oleo leg visibly compressed under the thrust from the engines!  She was shut down in a VERY serviceable condition and we retired to the NAAFI for Coffee and Cake. Grateful the snag list was pretty empty! 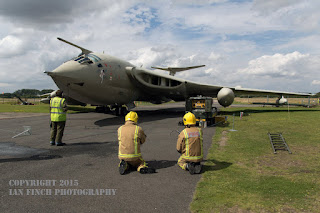 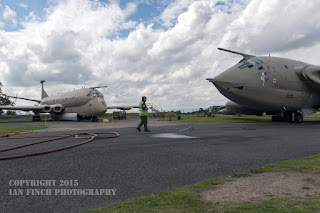 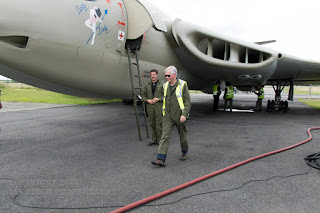 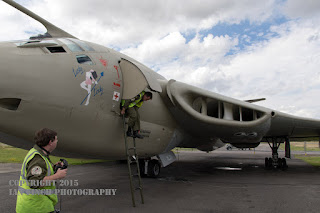 Posted by Missppitstop at 20:46 No comments:

We noticed that we had a hydraulic fluid leak on the port front inner brake unit and by chance the one and only boxed brake unit I had acquired some time ago turned out to be the correct one. So, we fitted the unit and bled the air out of the system without problem. Several brake pistons on the Port front outer brake unit were also weeping oil so I decided to renew the seals on these and all has turned out very well.  In addition we also fitted 2 replacement tyres to the outer front wheel. Engineering Students currently with the Museum from France ably assisted in this task and learnt a few extra practical skills. Pictured with team member Sam Ward. 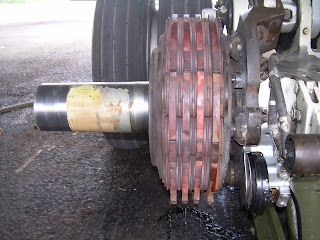 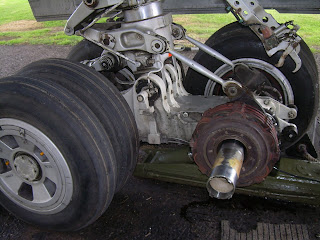 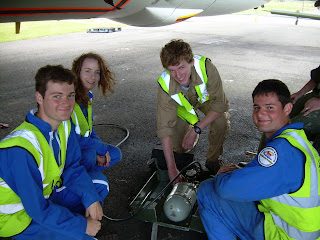 Posted by Missppitstop at 19:13 No comments: