The daunting task of taking on and keeping a 'V' bomber in a fully live condition dawned clearly once the RAF had left her. The offer of "Anything you need to know just ring" seemed a bit of a hollow promise and I knew it was up to me to sort out a team in order to keep on top of things.

The first minor fright came on New Years Eve 1993 when several of us decided to start the APU Artouse engine for the first time. We studied the books and rang a contact at Marham and he advised us accordingly. So, with reasurrance I pressed the start button. The engine lit up almost immediately and the sudden noise didn't do a lot for our nerve at that point and I shut the engine straight back down. We then adjourned to the NAAFI to contemplate the next start up. Because we had only managed to aquire a 28Volt ground power unit the aircraft was started without main AC electrical power and once the engine came up to full speed (elect) the 200 Volt AC supplies were generated. This was for the first time a bit awesome, as the aircraft suddenly came to life and we were in business. We were able to run hydraulics and flying controls as well as all AC controlled equipment, that was until the APU suddenly flamed out and we were unable to re-start it. With a hint of 'help please!' I rang Paul Covell her last Crew Chief and he said; "You've run 10 tank too low on fuel" (the dedicated APU supply). I asked him how to refuell it and his answer was that it wasn't possible without AC power on. He then asked if we had an AC ground power unit. "Err No" I replied. To Paul's credit he offered to drive over from Norfolk as a manual transfer had to be carried out and we agreed to cover his fuel costs for the journey. The manual transfer was exactly that and it involved a water drain tap tool and a length of plastic hose to tap off another tank! Once he had carried that out the APU lit straight up. Paul then refuelled 10 tank up from another tank using the AC pumps and we were left in no doubt by him that we had to keep it refuelled to its minimum level. As part of his visit he decided to turn the engines over for a 'dry run' which was the first turn they had carried out since delivery some weeks before. All was well and Paul left never to be seen or heard of again!! I have tried to track him down, unsuccesfully unfortunately, which is a bit of a shame as I think he'd be proud of what we have achieved with XL231 to date.

In the early part of 1994 help began to filter in in the form of ex-Victor people and serving and ex-RAF personnel. To date the team has altered a little, some have moved on but generally the people involved have all been 'top calibre' and most have stayed involved and I'm pleased to say the interest in the Victor and the V Force is more popular now than it ever has been. The team continue to be enthusiastic and long may it remain that way.

Our first Victor 'Pilot volunteer' was former Flt Lt, John Ledger. John had flown Valiants in the RAF and then Victors before a career in Transport Command that led onto him gaining a civil background on Boeing 707's for many years. Prior to retirement John was the senior pilot for Knight Air at Leeds & Bradford Airport which is when we met him. John taxyied XL231 for the first time in Summer 1994 and he was accompanied by Flt Lt Dave Mannion an Ex- Victor K2 Co-pilot in the Right hand seat. The Duo then carried out a public demo at the Elvington Airshow of 1994 giving XL231 a 'spirited' blast down the runway. John demonstated XL231 up until the airshow of 1998 and sadly it was his last year. A back injury sometime after the airshow became infected and unfortunately put him in a wheelchair. He has however remained enthusiastic for XL231. 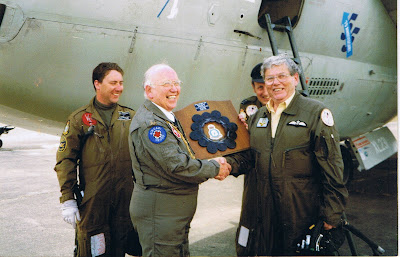 John Ledger being presented with a burned out brake stator from the previous Elvington Airshow by the (then) Lord Mayor of York who had just had a high speed taxy ride. From Left; Andre Tempest, Lord Mayor of York, John Ledger. Background Al Stephenson

Another pilot who offered his services in the early days was former Flt Lt Guy Marshall, an ex- Buccaneer and Tornado pilot. Guy remained on the the team for several years and accompanied John ledger on many taxy demonstrations.

With the front seats being occupied naturally we needed guys for the rear crew duties. Help arrived in the form of John Ledger's former AEO Sqn Ldr Alan Stephenson and Al became involved from 1995 onwards and he continues to be so to date. His story is related elsewhere on the blog.

With an AEO on the 'books' we naturally needed a navigator to be totally authentic and he arrived in the form of 'Pancho'. So named because of his uncanny resemblance to a moustached Mexican! His real name was; Flt Lt Colin Painting but, always 'Pancho' to us and the entire RAF including RAF Spaedadam where he remained a Mess member until his death in late 2010. Pancho's career was quite amazing. We never knew his real age but he was born in India and joined the Indian Army until coming to the UK, he then worked as a 'navvy' building roads until he decided he didn't like it and joined the RAF. He started flying on Wellingtons and Lincolns as a navigator before being posted to the B-29 Washington lend-lease bomber. He was selected for the V Force joining Vickers Valiants at RAF Gaydon. Because of his skills he was selected for flying in Victors before they ever entered RAF service at RAF Boscombe Down on trials work. He then joined 15 Sqn Victor B1's at RAF Cottesmore before joining the Strategic Reconnaisance Sqn No 543 at RAF Wyton on the Victor SR2. Pancho continued on Victors until he became an Air warfare Specialist at RAF Spaedadam and that is where he ended his career. He retired to the area due to the fact he was "Sick of the flat scenery of East Anglia!". Pancho joined us in 1997 and he made an immediate impression. Never one to mince his words and having a massive weakness for the opposite sex he was a 'loose cannon' in the nicest possible sense and very much loved by all of us who knew him. Once met never forgot is an apt description and he must have driven his long suffering wife Elsie round the bend!