The hand that shook the hand of Wilbur Wright - Lee Atwood 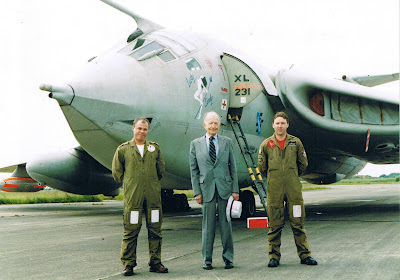 Lee Atwood was the designer of the P51 Mustang, F86 Sabre and X-15 rocket plane, as well as numerous other famous types and was heavily involved with the design of the Command and Service Modules for the Apollo Programme, America's Moon Landing Missions

He went around every inch of the Victor with minute scrutiny and pointed out various air intakes and fairings. His comments went along the lines of; " See these beautifull intakes in the nose? "Yes" I said. He replied with; "Very pretty but a total waste of time! Giving you a drag ratio of "(whatever figure he said on the day!) Then he mentioned the oil cooler intakes under each engine; " Well designed but useless aerodynamically!"

Then he shook my hand and said; " You've just shook the hand that shook the hand of Wilbur Wright". What could I say to that?? I was amazed by him, he was in his 90's and had just landed in the UK after travelling alone from California, he must have been tired out but, he held a lecture at YAM that night and the next day headed off back to America. He was so impressed with how he had been received in Yorkshire that he waived any fee and paid his own air fair. An amazing man and a total privelidge to meet him. It was very sad to learn that he passed away not long after his visit.