A sight not often seen nowadays and after October the only chance to see a Victor and Vulcan together will be in the RAF Museum Cosford.

XH558 carrying out 2 practice displays on Thursday 28th May at Elvington. Elvington Airfield is an ideal pre-season 'work up' location for the aircraft and its crews.

Several (including myself) hardy souls, braved severe wind conditions from the walkway on the Victor to view the Vulcan being put through its paces. 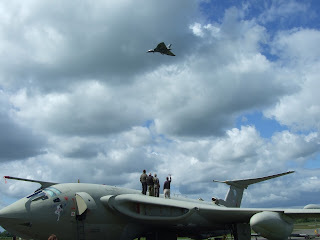 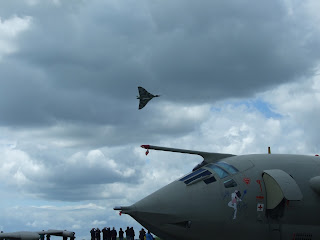 Posted by Missppitstop at 09:46 No comments:

One system that is very important is the venting system of the wings and fuselage fuel tanks. As fuel is used during engine running or during refuelling a tank, naturally the empty space has to be filled or purged with air. Hence the fuel venting system. Without this system a fuel tank could in a worse case scenario implode.

I noticed that the fuselage vent gauge was stuck and removed the transmitter which supplies the gauge with its reading, I also removed the gauge to assess and  'match' the two units after bench testing. I found the internal moving coil to be stuck in the transmitter and as there are no spares available I had no choice but to free it off with lubrication.  I then ran the gauge up and down full scale in order to to test the system out.

Normal operating pressure is 2.5psi - 4.5 psi. The system is 'red lined' at 5 psi for safety purposes and 8 psi is the absolute maximum pressure. The most we achieve at ground level is around 2.5psi.

Pictured, the gauge, transmitter and a spare cockpit vent panel 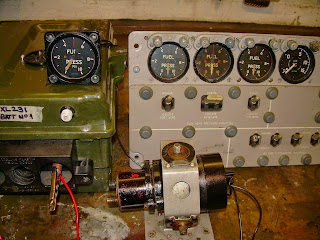 It was all re-fitted back in today and showing the correct reading with electrical power on and fuel pressure without engines running.

Posted by Missppitstop at 20:31 No comments:

An Old friend drops in.. 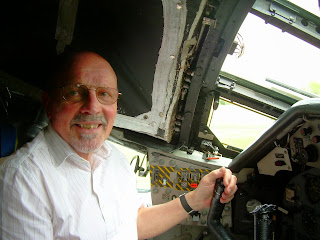 Having known Martin Withers for more years than I care to remember, it was nice to catch up with him once again aboard the Victor. Currently the Chief Pilot of Avro Vulcan XH558, Martin leads the Aircrew of  XH558, now sadly into its final display season and the end of all flying V bombers.
Posted by Missppitstop at 19:13 No comments:

The Victor team and myself lost a great friend and personality this week when Steve sadly passed away after more or less a lifetime of illness.

Steve was taken ill at the age of 16 as he was about to join the RAF with Crones Disease. Consequently he wasn't able to join the RAF and worked for a time at The British Library, Thorp Arch, Yorkshire. He also held a number of part time jobs.

Due to the severity of his illness he was unable to hold down permanent work and spent many, many months in hospital over the years. Basically being unfit for work he joined the Yorkshire Air Museum in its infant days as a volunteer and when he was well (which wasn't often) spent many trips 'trudging' hillsides in the Yorkshire Dales helping to locate and recover parts for the then intended Handley Page Halifax Bomber recreation. Trips to remote Scottish islands also bore Halifax parts including the center fuselage that was ultimately used in the Halifax at Elvington.

Steve also joined the Mosquito restoration project owned by Tony and Val Agar, along with Lee Norgate, Phil and Judy Pulleyn and others they were able to have a more or less complete Mosquito airframe rolled out in 1991. The Night Fighter Preservation Team, as they were then known had recreated an authentic De Havilland Mosquito!

Steve was able to learn to fly and earned the nickname 'Captain Crapweather' due to seemingly bad weather on a number of his flying lessons. He was also heavily involved with the Air Training Corps as a Civilian Instructor for many years and up to his untimely death.

I first met Steve just after my Father and I had bought the Victor, at first I found him difficult to get on with and to be honest if you didn't 'click' on his wavelength then you never would have got on with him. To stay Steve was unusual is not an insult, he was just different in so many ways. He knew his subject very well and was a fountain of knowledge. He was also the best 'scrounger' in the business. The saying "Cheap is good, free is better" was one of his unique sayings. He was also a damn good friend to myself and many others.  We (The team) also spent many happy weekends and trips away at various Wartime events dressed as Second World War airmen, we took it seriously, very seriously if a pub was located nearby!!

Steve did a lot for the Yorkshire Air Museum, He was involved with the acquisition of the Canberra (YAM's first Jet) He also built the replica Hurricane from a kit and was a big part in obtaining the Harrier GR3 for the museum. He joined in with the Victor Team from more or less day 1 and was extremely good at 'finding' things that were needed for the Victor. He also masterminded the first Victor tail braking parachute packing 'party' and many more after.

In 2002 he left YAM for a new challenge helping to get the newly formed South Yorkshire Air Museum in Doncaster off the ground. He did this with 'gusto' and built up a successful retail shop and a Model Club on the site, as well as holding Aviation lectures with a number of well known aviation personalities. For quite a number of years Steve was involved with the British Aviation Preservation Council (BAPC) and latterly for a number of years the Chairman. He was also a Trustee of the South Yorkshire Air Museum and latterly the Chairman of Trustees.

On his days off for well over 10 years Steve willingly assisted me in my classic car business and he became very knowledgeable and a great help to me.

In 2014 it became alarmingly obvious that Steve wasn't well. We knew he was always ill in some way but he was obviously struggling to walk and was clearly unwell. 8 weeks ago he was admitted to St James' Hospital Leeds and he was diagnosed with varying complaints. He was bed-ridden for the last 7 weeks of his life and we visited him many times in the last few weeks. He just grew weaker and he finally faded away at 8.15am Thursday 21st May.

Its apt to end here with one of Steve's legendary quotes; "No good will come of it!"

Lest We Forget
Posted by Missppitstop at 22:15 No comments: