Huge thanks to Kestrel Cam for capturing the run and providing some never before seen shots.

Enjoy!
Posted by Missppitstop at 08:26 No comments:

Fast Taxy - view from the cockpit


Victor XL231 'Lusty Lindy' during a fast (and wet) runway demonstration. Hence the very noisy windscreen wipers!  They are hydraulically driven individually by their own pumps and motors.

Flt Lt Ollie Suckling was in the Left hand seat and Andre Tempest in the Right.  The AEO was of course Sqn Ldr Alan Stephenson.

All engines were run at the JPT setting of 'Takeoff' for the high speed run. Due to weather constraints the tail braking parachute was not deployed and the display safety speed was agreed at 80 knots beforehand.
Posted by Missppitstop at 18:55 No comments:

XL231 is now prepared for the intended run on the 25th. However it was not without its 'trauma'. This morning during inspection and cleaning of the Stb'd bogie it was discovered that the Stb'd front outer wheel had a 13mm large head diameter bolt embedded in it sideways!
This naturally wasn't good news as spare tyre availability is now becoming critical anyway, especially on an aircraft with 16 mainwheel tyres! I suggested we deflate the tyre and inspect the damage for depth. This proved to be too deep to be acceptable as at least half of the 17ply layers were seemingly cut. We considered the tyre a 'write-off'. If the tyre had blown it would likely have taken its neighbour with it and damaged the brake piping and equipment in the wheel bay  That means following the last taxy run we have lost 2 tyres to damage and a 3rd written off to a deep cut apparently during towing out on the degrading perimeter track between the museum and the runway.

Therefore we have had to dismantle and rebuild a spare wheel with 2 replacement tyres in record time today in order to be ready for next week.

That aside, a full engine run and systems tests were carried out a week last Sunday and all went very well.
Subject to weather & serviceability we will be running after the Spitfire flypast at 14.30PM on Monday 25th August. Prior to this the Buccaneer and Nimrod will all be carrying out high speed taxy Demo's on the runway. Normal admission prices apply for the Museum but, for a further £10 there is access to a special close up area on Elvington Airfield. Revenue raised from this goes into fuel costs for the operating jets.
Posted by Missppitstop at 21:33 No comments:

Subject to serviceability, weather and no natural disasters, XL231 will be carrying out a high speed taxy demo on Elvington's runway, courtesy of Elvington Event's limited, the owners of the Airfield.

Flt Lt Ollie Suckling will be in the Left hand seat, Myself in the right and the AEO will be dependable stalwart Sqn Ldr Alan Stephenson. Crew Chief will be Grant Sparks (former Chief Tech).

A dedicated viewing area will be available, for details please check out the Yorkshire Air Museum website. In addition, it is intended to taxy the Museum's Nimrod XV250 and earlier in the day Ollie Suckling and myself will taxy (subject to serviceability) Douglas DC3 Dakota KN353 (G-AMYJ) for the first time since restoration. Also running will be the De Havilland Devon. 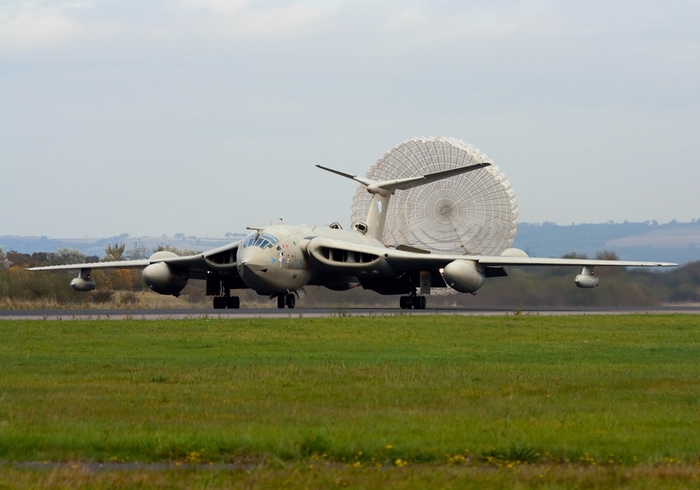 Posted by Missppitstop at 21:37 No comments:

The current 'tour' of the UK by the Canadian Warplane Heritage Lancaster  Bomber FM213, restored as  KB726, in honour of Flt Lt Andy Mynarski VC RCAF prompted a memory from 1988 when this historic aircraft first flew again in the capable hands of Sqn Ldr Tony Banfield. Ex-Battle of Britain Memorial Flight Commanding Officer. Tony Banfield has a Victor connection, he flew Mk1 Victor Tankers with No 214 Sqn at RAF Marham in Norfolk and later flew Lancaster PA474 the BBMF as well as an illustrious career with the AAEE at RAF Boscombe Down.

At the time of the first post-restoration flight of FM213, Tony was the only current pilot to have 2 Lancasters in his logbook. 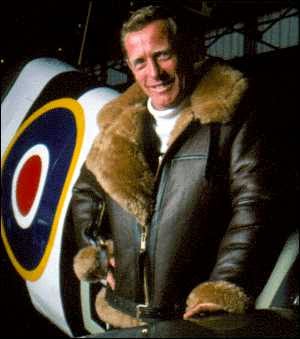 Tony is perhaps more famous for advertising flying jackets for Aviation Leathercraft and this advert has been seen in magazines for many years.
Posted by Missppitstop at 21:19 No comments: