It was in October of 1993 that I persuaded my father Gerry, that it really was a great idea to purchase a Victor K2.

Thanks to his 'investment' we were able to acquire XL231 'Lusty Lindy' and although he was not an aircraft enthusiast he was happy to go along with the plan and buy a Victor. I knew he was hooked when we drove through the gate at RAF Marham and he saw the Gate Guardian XH673. "What's that aeroplane?" he asked, I then replied "Its a Victor".  He then responded with "Wow! We are having one!"   The rest is history...

Unfortunately on the delivery date of the 25th November he was unable to attend the arrival as both my mother and him were on holiday in Fuji.

Over the years he was able to have the occasional ride in XL231, socialise with the guys and generally continue to show an interest in what was happening. He handed XL231 over to myself in 1995 but, continued to remain interested. The annual Victor crew barbecue at his home during the August Elvington Airshow's were always a memorable event....

Sadly, he was taken from us by cancer on the morning of the 23rd June 2013, after an unbelievable 3 year battle, that would have sunk a lesser person after the initial 6 month diagnosis. He took the disease 'head on' and fought it every inch of the way, he amazed the medical staff with his positive attitude but sadly he couldn't win. The family and some close friends were at his bedside over the final 24 hours.

My father touched many people, he had an ability to 'enthuse' people and situations, that is what made him a success in his business life. His influence helped many people in their own businesses. Sadly for him in 1986 he was taken ill and this turned out to be eventually diagnosed as MS in 1999. His general manner could sometimes be classed as 'difficult', awkward and a bit odd at times, however, he refused to beaten by MS.

Without the foresight by him to buy XL231 then, there is absolutely no doubt she would have been turned into Coca Cola cans. Because of this, the historic and preservation world has the benefit of a supremely rare and elegant aircraft and it has altered my life and many others on the team and otherwise in so many ways.

Please support Macmillan Cancer Support www.macmillan.org.uk whose care of my dad was fantastic.
Posted by Missppitstop at 22:12 3 comments: 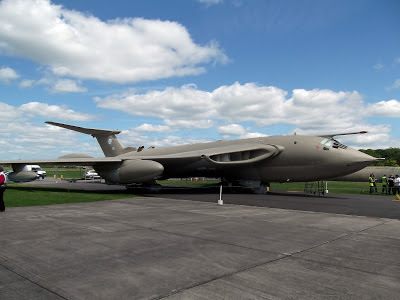 My sister, Bryony, our friend, Regan and I had decided we would take a trip to Elvington for June Thunder Day. We were all really looking forward to it, we live pretty close to Elvington, so we set off at 1130, and got there for about 1215, which was record timing for us! When we arrived at Elvington, everything was just perfect, the weather was stunning, we had the car windows down with the heat blazing, and our favourite music blasting as we drove down Halifax Way.

Regan had never seen a Victor before so as we turned round the corner, towards the entrance of Yorkshire Air Museum, I bellowed  "Lindy!" and I heard a slight mumble from the back seat of my car... "Woaaahh.." I think he was impressed. I parked my car and off we went looking for Andre and Team Victor.

We found Andre and Ian sat near the NAAFI...

"I have something in my car for you."

"If it's flapjack, we'll have it!" Both Andre and Ian said."Don't tell the others about it."

I'd taken the team the usual Flapjacks, but also took Haribo (Moralibo - As dubbed by Siobhan, VTTST's Official Photographer!) and the photos I'd taken at Battle Group North.

After giving the flapjack, Moralibo, and photos to Team Victor, I asked if Andre could sign some photos I'd taken - He did, and they look great! Thanks, Andre. :)

My former co-volunteers from VTTST, Andy, Terry, and Janet were also visiting the museum that day, so we went to meet up with them and have a quick chat as I'd not seen them for a while. It was really great to see them!

After saying hello to Andy, Terry, and Janet, we took homemade cake, more Moralibo, and photos from Battle Group North to Team Nimrod. Nimchick, AKA, Hannah, was stood on XV250's starboard wing, so I walked over and bellowed; 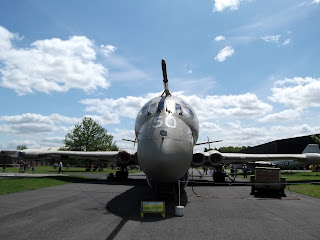 To which Hannah replied; "Cake! I'll be right down, I'll meet you over the other side."

Hannah appeared from XV250's portside, with Phil, I handed them the cake, Moralibo, and photos (from Battle Group North). A bit later on in the day, Hannah was walking around with the most adorable baby in aviation, Nimlet! As she was walking around she shouted; "The cake was great, thank you!"

And whilst pointing at Nimlet,  "Our official cake tester approves!"

Whilst waiting for G-AMYJ to fire up, we decided we'd go and take pictures and have a little chat. Bryony and Regan are still pretty new to aviation, so they told me to 'educate' them on the aircraft in the museum. It was fun! I love being able to pass on my knowledge to others. :)

Anyways, we spent a good 20 minutes taking pictures (mostly of Lindy and the Lightning!) then headed over to G-AMYJ ready for her engine run. She sounded wonderful, and she just sounds better and better every time I watch her fire up!

Up next was Hawker Siddeley Nimrod XV250's turn, plus a lovely RAF BBMF Spitfire flypast. I really enjoyed watching both - The Spitfire flypast was fantastic and XV250's engines definitely woke me up!

Just after XV250's run finished, we moved our way over to the right, just to be a little more in line with Lindy. We stood there for about 5 minutes or so... Richard walked over to us, and pointed at me then said; "You come with me..."

I looked at him, pointed towards myself... "Me?"

He then pointed at Bryony and Regan; "You two have to stay here... Sorry." up.' Which honestly led me to thinking I would be heading back over to the 'crowd line'. So I was stood waiting at the bottom of the ladders, with Richard, Ian and the rest of the ground crew.
Richard looked at me and said; "He's up there somewhere..."

Andre just popped his head out of the door and waved me up... "Up here!" He said.

After a few girly screams, I handed my bag to Richard,  and made my way up the ladder. In the teeny tiny cockpit, Andre told me to sit down in the sixth seat and gave me a head set. As he handed me the headset he said; "We can't fire her up full, it's just a dry run, because of the cars behind us, but you can listen to the intercom."

As I put my headset on, Graham, who was sat in the co-pilot position peered to the left and said;
"Hello, I'm Graham, Blue 2!"

I'd spoken to Graham on the TwitterVforce forum quite a bit, but never actually met him in person... So it was nice to finally meet him!

Andre squished passed me and sat in the 'captains' seat. As he sat down, I asked if I could 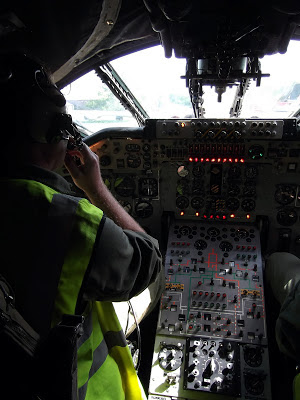 film/photograph and he said I could. I was so excited!

John was in the back, he was running through the systems alongside Andre and Graham.

Graham checked my headset was on and working, everyone was chatting and testing the intercom system. Andre turned round and said; "Amy, can you hear us?"

"Do you want the door open or closed?" "Closed, then it's a little less noisy for us up here."

Richard came and closed the door, then the team proceeded to run through all of Lindy's systems.
I didn't really know what to expect to be honest. I've never experienced anything like that before!

I sat there quietly, filming and taking photos, listening to what the crew were saying. Andre and Graham ran through the cockpit systems, and gave the hydraulics a 'good work out' - Graham did seem to struggle a little with the controls, he said they were heavy... They looked it!

It was strange, when I got home and I watched my sister's videos, I didn't realise how loud Lindy actually was! In the cockpit, I heard none of the noise, even on my videos, it was loud. But at the time, on the inside, it was quiet and quite serene, whereas on the outside, Lindy roared!

It was really hot in the cockpit, my makeup had pretty much melted off my face, and my hair had frizzed out like crazy (damn 'AvFemGeek' problems!), but all in all, I will not allow myself to complain. It was a fantastic experience, and I'm a VERY lucky girl!

After everything had been checked, Richard came back and opened the door, let me tell you, I have never been so happy to feel a breeze! I thought my car was hot, but it's even worse inside aircraft! Lindy was like a sauna. :) I clambered out of the cockpit and Rich was stood at the bottom, "Did you enjoy that?" He said. "Very much so!" I replied.

Andre climbed out, and I thanked him. He said; "Hot in there isn't it! And we weren't even wearing bone domes and flying gear!"

I thanked him once again... And made my way back over to Bryony and Regan. I even had a little 'victory' dance on my way back across!

Bryony and Regan greeted me, and Bryony said to me 'I'm really proud, I didn't think you would have gone up!' And to be honest, a year ago, I probably wouldn't have gone up.

After talking to Bry and Regan about being sat in the cockpit, I was still buzzing, but we decided to have a little walk around then go home, we'd looked at everything in the museum, and we had to get Regan home so he could revise for his GCSE's! (good luck, kiddo!)

We headed back to my car, and I rang my mum; "MUM GUESS WHAT!"

"What? Is everything okay?!" She said with slight worry in her voice.

I proceeded to explain, I don't think she had a clue about anything I was telling her, but she seemed very pleased for me! I drove home, absolutely buzzing!

This year has been a year of so many firsts and Team Victor have played a massive part in that. I really cannot thank them enough! As always, I left Elvington feeling really happy, content, and after yesterday, on a really big high. Sitting in a cockpit of your favourite V-Bomber during dry runs is certainly one way to end your weekend, if not the best way!

No doubt I'll be back at Elvington soon... With flapjack and Moralibo!

Once again, massive thank you to Andre and Team Victor, you guys rock!

Amy
Posted by Missppitstop at 20:35 2 comments: