It was with sadness that I received the news over the weekend that John Ledger, XL231's first volunteer Captain for her initial taxy runs at Elvington had passed away.

John, a remarkable witty character first appeared at Elvington in early 1994 when he was in his last flying role as Chief Pilot for Knight Air at Leeds & Bradford Airport. The 'Dunkeswick Air Disaster' later in the year involving a company aircraft dissolved the company and John took retirement.

After flying training in the RAF. John was posted to Canberra's and then selected for the V Force. He was posted to the Vickers Valiant Fleet and was selected to be the co-pilot on Britain's first Atomic weapon drop trials in Valiant WZ366 at Maralinga ranges in Australia, he was remarkably non-plussed and stated that "We killed a few Kangaroos!"

After Valiants John flew the Victor B1 before applying to RAF Transport Command for Britannia's. His posting came through; Victor B2's!  John was unhappy at the thought of Victors again but, came to love the aeroplane.  He finally got the posting he wanted and flew Britannia's before leaving to pursue a Civil career in the airlines. Initially with Monarch he flew the Britannia and flew the IWM's Monarch Britannia 'Victor Tango'on an around the World trip before re-training on his favourite, the Boeing 707. Monarch still had Navigators in those days and being typical ex-RAF he use to taunt them and some of his taunts are hilarious but, not for this blog!  Following Monarch he joined the Jordanian carrier ALIA on the Boeing 707 and 720B, he described the latter as the 'hotship 707'. John then flew for a number of airlines until his retirement and then spent 4 years with us at Elvington taking XL231 on its first taxy run as a Civil Victor in 1994. He put enormous faith in myself in the team and before long brought his old AEO Al Stephenson along and Al continues with us to this day.
A severe back injury in 1998 forced John to step down and it hurt him tremendously because he had to give it all up. He did occasionally visit and his sense of humour never really waned, drunken barbecue's and parties with his lovely ex-air hostess wife Maggie were a thing of legend. sadly John's last few years were wheelchair bound and I last saw him a few years back at the Newark V Force reunion. 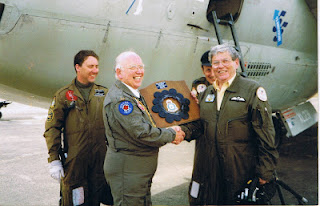 "John, I hope that wherever you are, you are at peace with your beloved Valiant's, Victors, and Boeing's. You were a great friend and good company and you put a lot of faith in us to do it right".

Posted by Missppitstop at 11:06 No comments: