I first arrived at RAF Wittering to fly Valiants on 138 Squadron in December 1958 and was therefore already at Wittering when the first Victor B2's arrived to form 139 Squadron on 1st February 1962. Some Victor B1 crews had already completed conversion training to the Victor B2 and were eagerly awaiting the arrival of the new aircraft from the Handley Page factory at Radlett. XL231 was amongst the first 6 along with XL163, XL190, XL191, XL232 and XM716.

The waiting crews had been issued and fitted with all their high altitude equipment including g suits, pressure jerkins, air ventilated suits, upgraded oxygen masks and 'spaceman' helmets in anticipation of the arrival of these new high altitude, high performance, state of the art aluminium bombers. Most had waited some time and a 'Brocklebank' cartoon appeared on the Squadron in which classroom forms had been laid out in V crescent shape and were being sat on by five guys in full spaceman flying kit. The 'crew' looked rather fed up with the wait! They and most of us 'old' Valiant crews were eagerly waiting on the tarmac for the first B2 to arrive. It was being flown up the A1 at low level by the Handley Page test crew using sign posts and the East Coast Main Line to navigate from Radlett.On arrival, the door opened and a red carpet cascaded out of the door onto the tarmac followed by 4 HP test crew smartly dressed in pin-stripe suits, bowler hats, umbrellas and carrying briefcases. How amusing!!

My last Valiant flight before starting the Victor B2 Operational Conversion Unit (OCU) was on 1st March 1962. Following the OCU, I arrived on 139(J) Squadron in August 1962. My first flight in XL231 was on 12th October 1962 followed, over the next year, by a further 12 flights totalling 65 hours before the aircraft moved from the Squadron to the OCU.

Over the years August 1962 - July 1965, whilst on 139 Squadron and then from August 1965 to December 1968 when I was a member of the No.1 Group Standardisation Unit (Victor) I managed to fly all the Victor B2 and SR2 aircraft. I was pleased to be reunited with most of them in July 1975 when I joined 55 Squadron at RAF Marham to receive the newly modified Victor K2's.

Here's to XL231 on her 50th birthday. Let us salute her proud record of service during both the 'Cold War' and subsequently during her many deployments in the Strategic Tanker role. Finally, we all owe a great debt of gratitude to Andre Tempest and his team of expert helpers at the Yorkshire Air Museum for keeping 'Lindy' in superb operating condition for the best part of 20 years since her active service ceased. 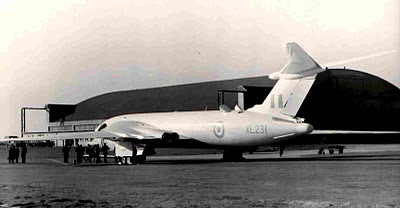